Kent E. Hovind is a 62-year-old Baptist minister from Florida, who has spent over eight years in federal prison. Some say it is for his outspoken religious views. The government insists it is because he allegedly committed that most heinous of crimes, “tax evasion.”

Now, just before he was due to be released, he and co-convicted associate Paul Hansen are facing new charges of mail fraud and contempt of court, which could keep them in the slammer another 20-100 years—effectively a life sentence.

Why do federal authorities consider these two so hateful that they dare not restore the men’s freedom? AMERICAN FREE PRESS contacted two of Hovind’s longtime supporters, Ernest Land and Rudy Davis, to learn the answer.

In 1991, Hovind established Creation Science Evangelism (CSE) as a significant part of his religious ministry, in which he defends a literal six-day creation of the world by God, as recounted in the Bible, against the current scientific orthodoxy of evolution. Known as “Dr. Dino,” he even built a dinosaur theme park, originally funded entirely by donations, where families could come without cost to learn about the science supporting a creation account of the world. Hovind also publicly opposes homosexuality and other state-sponsored immorality.

What brought Hovind, and then-trustee of his ministry’s property, Hansen, into the sights of the Internal Revenue Service (IRS), however, were his controversial views on church, state and taxation.

Ernie Land explained: “I’m a believer . . . that Satan is controlling the governments of the world” in order to lead people into slavery in the New World Order. Hovind, says Land, believes that federal tax laws, especially the 501(c)3 exemption, are a tool to keep Christian churches from preaching religious truth or revealing the real source of growing government tyranny, and that federal laws do not require churches to register for tax exemption. They point to IRS documents as proof of the latter.

The IRS claimed Hovind should have been withholding payroll taxes on his workers, who were treated by the ministry as contract workers, and that CSE was not a “church.” This was the supposed “evasion.” The feds also alleged that normal, large cash withdrawals to pay workers were “structuring”—a form of money laundering.

In a document provided by Davis, Hovind alleges that the 2006 trial prosecutor, Assistant U.S. Attorney Michelle M. Heldmyer, deliberately withheld exculpatory evidence, in particular, letters from an “IRS enrolled agent, a CPA [Certified Public Accountant] and an attorney [which] stated clearly that I was violating no law and owed no tax.”

At sentencing, U.S. District Judge Margaret Catharine “Casey” Rodgers appeared to have an emotional meltdown. Several people have sworn an affidavit that she claimed Hovind’s behavior was “worse than that of a rapist.” These words do not appear in the official transcript, leading to charges of tampering by Hovind supporters.

But what is in the transcript may be worse. Judge Rodgers, a George W. Bush appointee, vented her extremist beliefs in American civil religion, implying that Hovind was guilty of treason for failure to pay taxes he may not have owed.

While Reverend Al Sharpton, former Treasury Secretary Timothy Geithner and hundreds of federal employees go unprosecuted for more serious tax crimes, and many rapists and child molesters are punished less harshly, Rodgers stated in part: “This is a serious case, serious charges, serious conduct. Make no mistake about it. By your conduct in this case, Mr. Hovind, in my opinion, you dishonored the men and women in our military. You dishonor your fellow Americans, and you’ve dishonored the Constitution of the United States.” 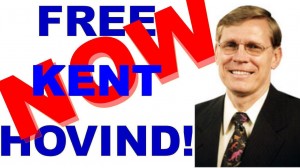 During imprisonment, Hovind was transferred 23 times, causing another prisoner and even a corrections officer to express shock, since frequent transfers to new hostile environments can result in death.

Moreover, added Land, “They have destroyed the Hovind family. They are scared to death.”

In addition to prison time, 10 properties owned by the CSE ministry were seized by judicial order as “restitution” to the IRS. In 2011, however, when appeals of the seizures were still pending, Hovind and Hansen defied a court order and filed notices of pending litigation on the properties, essentially to warn potential buyers of a potential color to the titles—a normally reasonable action.

For this last move, Hovind and Hansen were scheduled to go to trial on February 9 on the fraud and contempt charges. But the same Judge Rodgers denied them their right to a speedy trial because the prosecutor had an alleged “family emergency,” delaying it until March 2.

Hovind and supporters believe the judge has shown a pattern of anti-religious bias and asked Judge Rodgers to recuse herself. In one example in 2009, Judge Rodgers cited two schoolteachers for contempt for silently praying before lunch, leading over 50 congressmen to issue a letter supporting the teachers.

Whatever the motivation, there seems indeed to be an extreme government hostility toward Hovind and Hansen. And maybe keeping cells full in the “prisons-for-profit” system is another cause.

For more information or to support the two men, visit FreeKentHovind.com and 2Peter3.com.