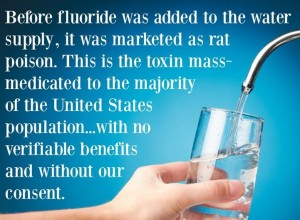 (NaturalHealth365) Water fluoridation in public drinking water has been a controversial subject for decades. Now, finally, a high court in New Zealand has ruled that fluoride in water is like adding unwanted medication to the public water supply.

No doubt, this is a positive step toward abolishing the practice of fluoridation. Keep in mind, adding fluoride to the water supply is dangerous to human health. In fact, many studies have shown that fluoride affects IQ and other key bodily functions.

The majority of judges agreed that it is difficult to avoid fluoride in drinking water, further bolstering their decision against it. Although, some of the judges say the science on the matter isn’t settled. Chief Justice Sian Elias said fluoridation is ‘unlawful.’

Thankfully, the majority of the New Zealand Supreme Court ruled that putting fluoride in water amounts to applying a medical treatment without the consent by the general public. The Court further stated that information reports saying water fluoridation measurably reduces tooth decay without health risk is ‘misinformation.’

Now, we just need water authorities (and political leaders) in the United States to wake up and see this truth.

Health problems from fluoridation and fluoride exposure range from neurological issues to cancer.

There’s an overwhelming amount of scientific evidence proving that water fluoridation is ineffective (at best) to protect our teeth. And, to make matters worse, the poisoning of our public water supplies cause significant health risks.

For example, the U.S. Food and Drug Administration (FDA) admits that toothpaste is a poison. The proof of danger is on every toothpaste label within the United States. Consumers are warned to ‘seek medical help’ if fluoride in toothpaste is consumed. (does that sound healthy?!)

In addition to lowered IQ, chronic exposure to fluoride can trigger thyroid disorders, high blood sugar, gut problems and hormonal imbalances. To be blunt: fluoride should be avoided at all costs. Over 300 studies say that fluoride is a neurotoxin. And, about 50 scientific studies link fluoride exposure with reduced IQ.

There’s even an increased risk of cancer by consuming fluoride, according to many studies. Should you filter your water? The short answer is yes! Or, if possible, try to locate a clean source of natural spring water. The reward of better health will be worth the effort.