Grammy-winning Christian duo For King & Country are gearing up for the release of their new movie, “Priceless: She’s Worth Fighting For”, a thriller/drama highlighting the reality of sex trafficking in the U.S. and the redemptive power of faith and love.

Inspired by real events, “Priceless” tells the story of James Stevenson (Joel Smallbone), an embittered widower who finds himself unwittingly involved in a human trafficking ring after he accepts a delivery job across the country in order to raise money so that he can retain custody of his young daughter.

When James, still struggling with his own inner demons, discovers he’s delivering a person – not a product – he is faced with a life-changing choice. The result is a gripping plot that exposes the horrific nature of human trafficking while simultaneously telling of the love between father and daughter, two sisters, and finally, a man and woman.For King & Country singer Joel Smallbone stars in “Priceless”

In an exclusive interview with The Gospel Herald, Joel shared how the idea for “Priceless” was birthed out of the Smallbones’ convictions of how women should be treated coupled with a desire to tell the stories of women who have suffered through devastating circumstances.

“James, is a physical hero, but he’s a bit of an idiot,” he said. “He’s trying to save these women, but it’s out of guilt, and he’s trying to set things right for his own well being. Ultimately, she saves him mentally, physically and spiritually. She is more the hero in some context than he is. In that way, this film really lifts up and celebrates a woman’s worth and being priceless.”

According to a staggering statistic announced on NBC’s “Today” show, every 30 seconds someone falls victim to sex trafficking, and UNICEF reports that more than a million children are trafficked each year.

While the film doesn’t hit theaters until October 14, a novel based on the movie – written by Nancy Rue and Joel and fellow For King & Country member Luke Smallbone – is available now.

“The first five chapters of the book precede the film so you really get a more in depth understanding of who James is and where’s he’s coming from – it’s a very charming, exciting component,” explained Joel. 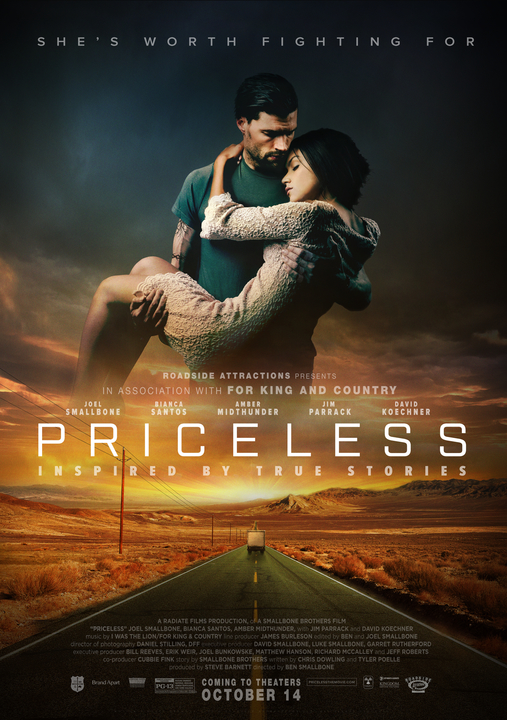 For the Smallbones, “Priceless” is a family affair: It’s directed by Ben Smallbone, while David Smallbone and Luke Smallbone serve as executive producers: “It’s been one of the most radical and difficult and rewarding projects we’ve ever been a part of so far,” Joel admitted.

The brothers hope the film impresses upon viewers a simple but powerful message: You are absolutely priceless and worthwhile in the eyes of God.

“I hope men walk away with a deeper sense of a call to dignify the love of a woman, fighting for a woman while also protecting a woman and cherishing her and being committed to her and lifting her up,” he explained. “On the other side of the aisle, this film really celebrates the impact a woman can have when she finds her self-worth not in her physicality or her identity towards any man, but her identity under God and who she is made to be. That woman is able to radically impact everyone around her including the man that she’s connected.”

For more information, please visit the film’s website at www.PricelessTheMovie.com.