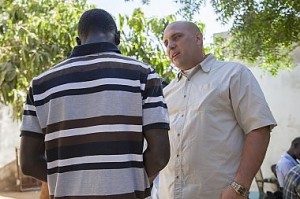 Jorge Reina (right), a missionary from Venezuela, talks with Ahmad Faraj*, the first young man Reina felt God leading him to disciple after he moved to Senegal a year ago. After deciding to follow Jesus Christ, Ahmad’s family wanted to kill him, and he narrowly escaped by sneaking out through a window. He now lives and serves alongside Jorge at a home for boys in Senegal. *Name changed
Photo © 2014 IMB / Lina White

Ahmad Faraj* was 16 and grounded, locked in his room. He wasn’t surprised he was in trouble, but he was surprised at how much trouble he was in. He held his breath, pressed his ear to the door and listened to his parents talk punishment.

Taking the car keys away — that wasn’t their plan. Neither was taking away the TV. “We have to kill him,” he heard his mom say. “We can’t have a Christian here.”

The minute Ahmad walked back into his hometown and told people he’d decided to follow Jesus Christ, his entire village got together and beat him to a pulp. Then his parents took their wounded son home, locked him up and began to plan how to finish him off.

He kept his ear to the locked door late into the night, until the house had gone silent, then slipped out the window and ran back to the place where a door was always open for him — Jorge’s house.  It’s a house full.

From suicidal to saved

Jorge Reina, a burly Venezuelan man, moved to Senegal a year ago to take in young boys who needed a place to go – boys like Ahmad. In the sandy West African country, it’s normal for villagers to turn their children over to leaders of the local religion who promise to give them care and education.

More often than not, the kids end up begging on the street. Jorge can’t handle that. So he’s taken in as many as he can, with plans to take in more. And the ones who roam the street barefoot, begging with dirty bowls — he invites those in, feeds them breakfast and shows them what Christ’s love looks like.

“Many of them have no love at home because their parents think that the more they mistreat them, the better men they will become.” So when Jorge hugs them and hangs out with them, “it changes everything” he said.

Jorge knows. He himself — drug-addicted and desperate — walked off the streets once and into the arms of people who loved him like Christ. “At the age of 16, I started doing drugs — all kinds of drugs,” he said. “Twenty years went by, and I went through some very difficult times.”

He was living on the streets. Smuggling drugs. Dabbling in witchcraft. Engaging in sexual sin. “I wanted to die … I decided to hang myself. The belt that I hung myself with broke in half and I felt my feet hit the ground and I gasped for air,” Jorge said. “I said to the Lord, ‘If You exist, help me. If you really exist, help me.’”

The next day, God led him to the house of the local Baptist pastor, who led him to Jesus Christ.

“The Lord saved my soul, my life, and I accepted Jesus Christ, and I actually started serving Him,” Jorge said. “I said, ‘Come into my heart, be my Owner, be my Savior. I am yours. I have nothing to pay You with; I can only offer You my life and my hands and whatever you want.’ And that day I started experiencing the power of God in my life.”

And it wasn’t long before God began to show Jorge that He wanted to redeem his past and allow Jorge to make good on his offer.

From bread maker to missionary

One day, Jorge heard a story about men “from all over Latin America” who were serving God in parts of Central Asia 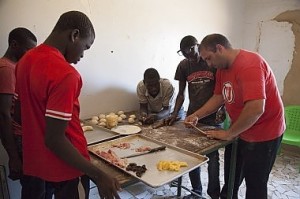 Jorge Reina (right), a Venezuelan bread maker, shows a group of young men how to prepare dough to be baked. A former drug smuggler who met Christ, Reina moved to Senegal a year ago to feed boys, teach them bread-making skills and disciple them.

where the Gospel meets with deadly persecution. Men with pasts like him. Men who smuggle Bibles.

He began to ask questions about missions. He enlisted at Venezuelan Baptists’ cross cultural missionary training center, where IMB missionaries Paul and Robin Tinley took Jorge under their wing and began to disciple him.

And then one day he met Jesús Guillén. The two bumped into each other at a conference in southern Venezuela, and “Pastor Guillén showed me a different spectrum, a different dimension of what missions in Africa were like,” Jorge said.

And he asked Jorge his profession, something Jorge was embarrassed to answer in the midst of the doctors and lawyers present. “I only know how to make bread,” Jorge told him. “That’s what I do.”

Pastor Guillén was elated. “Would you like to know more about Senegal? You could serve the Lord there,” he told Jorge, “and we need someone over there [who] can make bread.” There were mouths to feed — lots and lots of mouths.

Jorge went home. He prayed. And when Guillén called him to ask again, he said “yes. The next thing Jorge knew, he was packing his bags for Africa, headed to meet a team of other Latinos, a house full of boys — and one big commercial bread machine.

From darkness to light

When Jorge got there, Ahmad “was the first person I felt in my heart I should disciple,” he said. So he began to encourage the young man, “spending all day with him over here, over there, wherever I went … praying.”  And teaching him how to make bread.

The desire of Jorge’s heart, he said, is “for people to learn to make bread and to satiate their hunger,” but that isn’t the reason he came. “When one of those brave men gets up and says, ‘I am convinced that Jesus Christ is the way,’ and accepts Him, that’s a great joy. It’s wonderful,” Jorge said.

That’s the whole reason he and those he works with came all the way from Latin America, leaving their families — in Jorge’s case, a young daughter — behind.

“I didn’t come to make bread,” Jorge said. “I came to show [the boys] that a man who lives in darkness can only be brought to light by Jesus Christ. When those guys decide to move toward the light, I say, ‘Thank you, Lord,’ because that’s what I came for.”

To learn how God might want to use your talents and experience overseas through IMB, visit going.imb.org.