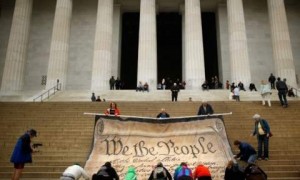 Admittedly, the fact that my 12 year-old has a deeper knowledge and understanding of civics and our founding principles than most college 20 something’s is troubling to be sure. It’s at least an indicator of more difficult times ahead for a nation that’s apparently lost sight of its moral standing in the world.

Now Barack Obama was not the catalyst or even necessarily the most pivotal player in what I now see as America’s generational decline. But as president, he’s certainly advanced a culture of victimization, class warfare and divisiveness, the likes of which I simply cannot recall. This comes much more clearly into focus as we approach the 2014 midterms, with pet causes and matters of personal validation once again encroaching on critical issues like the economy and foreign policy. With the help of a hopelessly biased “main stream” press, facts are noticeably absent from much of the conversation two weeks ahead of what may be the most pivotal election in recent times, while fear mongering and attack ads highlight candidates stances on things like “gay marriage” and “abortion” as a means to confuse or play on the emotion of the electorate. Ironically, little or nothing would change on either of these two fronts with the election of most any of the candidates today. But this is nevertheless an example of how important it is for the American people to be vigilant in pursuit of an educated vote.

Consequently, and when taken in the context of our efforts, or lack thereof, along the lines of educating those to whom we mean to pass on this nation eventually, abuses of political power like those we’re seeing in Houston by Mayor Annise Parker take on a whole new significance. To be clear, it’s incumbent upon “We the People”, and more specifically “We the Parents”, not only to speak up and confront this type of gross political overreach regardless of our ideological or personal leanings, but also to exercise that moral obligation to educate our kids on the “why” of why this type of self-serving foolishness is never acceptable in a representative republic under law.

Without question, the greatness of our country hinges on the freedom of its people to engage in the discourse of the time. However the results/renderings of those debates, be they in the form of legislation and/or public policy as generated through the process of government, (city, state and federal), must be rooted in the fundamental tenets of our Constitution and Bill of Rights as they apply to all citizens of the United States. Absent these basic and undeniable truths, and as they should be taught to future generations without prejudice and/or revision, this “one nation under God” will not stand as originally intended in our children’s lifetimes.