From Liberal Judaism to Faith in Jesus

My background is liberal Judaism—Judaism without skullcaps, regular synagogue attendance, or even the food laws. (Yes, we ate bacon!) But despite our lack of observance, I knew that I was Jewish rather than anything else.

At the age of 13 I had my bar mitzvah service, a coming-of-age ceremony in which I recited a passage from the Torah in Hebrew. I was glad to take part in it because I wanted to align myself with my Jewish ancestors. I was very conscious of the suffering experienced by my family during the Holocaust: my great-grandmother was murdered at Auschwitz; my great-aunt survived Auschwitz; and my great-uncle survived Mauthausen. They suffered simply for being Jewish. I wanted to honor that by standing in the same line of Jewishness.

The long weeks of bar mitzvah preparation didn’t give me answers to life’s biggest questions. The thing on my mind at that time was the inevitability of death. It seemed to make everything I was doing pointless. I thought it was strange people put so much effort into their lives despite knowing they would die and then be forgotten. Living life seemed like writing a book using a special kind of ink that quickly faded into nothingness. Why write the book if the ink will soon disappear? Why put so much exertion into living when death makes all that striving utterly meaningless?

I remember imagining death in his black hooded cloak, scythe in hand, looking at me and laughing as I studied for a French test. I could almost hear him saying, “I’m going to have you before too long, and what good will your French verbs be to you then?” There were some weeks when I shuffled miserably through everything because I couldn’t see the purpose of any of it once you factored in death’s inescapable scythe. 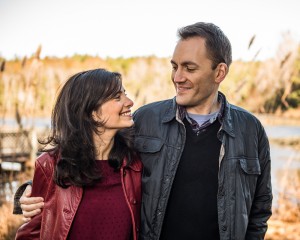 When I was 15, two boys at school made an announcement in our morning assembly about an upcoming meeting of their Christian group. I went along to the meeting eager to hear a new explanation of life that might finally answer my questions.

The guest speaker, a pastor named Jonathan Fletcher, gave a talk on one sentence from the Bible: “Just as Moses lifted up the snake in the desert, so the Son of Man must be lifted up, that everyone who believes in him may have eternal life” (John 3:14–15). In other words, Jonathan explained, when Jesus was lifted up on the cross, he made it possible for people to live forever. Jonathan said that when the Israelites were in the wilderness, there was a plague of venomous snakes. Moses fixed a bronze snake to a pole, and whenever the Israelites were bitten they could simply look at that bronze snake and they would live. Jonathan said that our rebellion against God was more serious than a lethal snakebite. But Jesus was willingly nailed to the cross to solve that problem by taking the punishment for sin. All we have to do is look and live.

I knew immediately that eternal life would transform everything for me. But one significant matter still had to be addressed. I went to Jonathan after the talk and said, “I’m Jewish, so I suppose this isn’t for me.” He had a good response: “Jesus himself was Jewish! He’s the Jewish Messiah, the one the Jews were waiting for. If you follow him, you’ll be following your own Messiah.” It was extremely reassuring to hear that I could still be Jewish and believe in Jesus. I began following Jesus that evening and gratefully received the gift of eternal life.

Lying on my bed one day during my first year as a follower of Jesus, I read Isaiah 53, not knowing that it was one of the most famous chapters in the Bible. I sat straight up and said to myself, “I’ve made an amazing discovery that no one else knows about! This chapter in the Old Testament is all about Jesus!” I later realized I was hardly the first person to make that discovery. Isaiah 53 is one of many prophecies pointing ahead to Jesus. My friend Zigmund Rogoff, another Jewish believer in Jesus, likes to say Jesus fits the Old Testament prophecies about the Messiah like a finger fits its own fingerprint.

In light of Jesus’s fulfillment of the Old Testament prophecies, Christians often ask me why so few Jews believe in him (in Israel, for every one Jewish person who believes in Jesus there are five hundred who don’t). The answer ultimately lies in the unsearchable purposes of our sovereign God. But from the human perspective, three reasons stand out. The first is the sad history of Jewish persecution by Christians. It’s understandable that Jewish people are suspicious of Jesus after centuries of being persecuted in his name.

The second reason is the widespread feeling among Jewish people that you can’t be Jewish and believe in Jesus. It often turns evangelism among Jewish people into an uphill climb. When I stayed with relatives in Israel a few years ago, they found the concept of believing in Jesus while still being Jewish especially hard to grasp because they’d never once met a Jewish Christian or Messianic Jew (an alternative name for a Jewish follower of Jesus). Initially, they decided I must be a Jehovah’s Witness! But my own testimony shows that Jewish people can respond positively to the message about Jesus, even at the very first hearing.

Another reason, humanly speaking, why so few Jewish people believe is because so few have heard. Isaiah 52:7 says, “How beautiful on the mountains are the feet of those who bring good news. . .  who say to Zion, ‘Your God reigns!’” Jonathan, the man who preached the good news to me, has beautiful feet. May God raise up many others like him to tell Jewish people throughout the world to look with faith at Jesus, their Messiah, and live forever.

If you’re looking for answers there’s no better place to turn then to God, the Creator of Heaven and Earth.  The Bible says, “Confess with your mouth, that Jesus is Lord, and believe in your heart that God raised Him from the dead, and you will be saved.” (Romans 10:9) If you’ve never done that, or if you need to recommit yourself to follow God, then please don’t wait any longer.  Ask Him now in a prayer like this:

Father, please forgive me for my many mistakes. I know that I haven’t always been the person that I should be. I accept the sacrifice of your Son Jesus for my sins and I ask you to forgive me and help me to live the rest of my life for you. You alone have the answers and can teach me of your plan for my life.