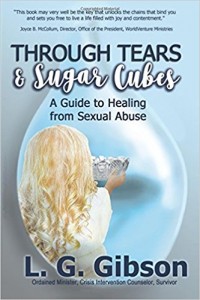 Over 223 million Americans have had at least one traumatic experience at some point in their lives. At any given time, 24.4 million people are struggling with Post-Traumatic Stress Disorder (PTSD). While much light has been shed on the PTSD epidemic in the military, millions of Americans in the civilian population are silently suffering.

PTSD is cited as the culprit for approximately half of all outpatient mental health patients. Those dealing with PTSD are shown to use and abuse illegal and prescription drugs nearly three times more than the general population (35 percent).

PTSD also carries with it a hefty price tag of $42.3 billion yearly.

Over the past thirty years, L.G. Gibson, a survivor of sexual abuse, has ministered to several hundred hurting men and women allowing them to become healed from the physical, spiritual, and psychological effects of abuse.

L.G. Gibson is not your run-of-the-mill grandmother. Like most grandmothers, she can be found tending to her organic garden or baking cookies with her grandchildren, but Gibson has also chased down pimps, pleaded with judges on behalf of prostitutes, and roamed the dark streets of the South’s crime-ridden inner cities searching for lost souls.

Gibson’s tenacity and spunk afforded her the courage to hit the rough streets to rescue victims, but her endearing manner and love of Christ, has allowed her to go beyond rescue and offer a proven method of recovery that she has shared with hundreds of now-healed survivors of abuse.

Her experience is chronicled in Through Tears and Sugar Cubes: A Guide for Healing from Sexual Abuse.