Pollock writes: The institute is intended to serve as a “legacy” for McCain and “is dedicated to advancing human rights, dignity, democracy and freedom.” It is a tax-exempt non-profit foundation with assets valued at $8.1 million and associated with Arizona State University. 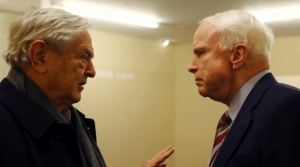 Bear an uncanny resemblance to the glitzy Clinton Global Initiative

Critics on both the left and right say the institute poses serious conflicts of interest. They say that the new organization’s donors and “McCain’s personal leadership in the organization’s exclusive ‘Sedona Forum’ bear an uncanny resemblance to the glitzy Clinton Global Initiative (CGI) that annually co-mingled special interests and powerful political players in alleged pay-to-play schemes.”

Philanthropy law expert Charles Ortel said “high government officials such as John McCain, [former Secretary of State] Hillary Clinton and President Barack Obama should not get involved with vehicles like these where substantial sums can be funneled over time in ways that at best, reeks of impropriety and at worse are public corruption.”

Donations of up to $100,000 have been received from billionaire leftist meddler George Soros and from Teneo, a firm created by former Bill Clinton bag man Doug Band. Teneo has helped to make Clinton rich through high-dollar speaking engagements and business deals.