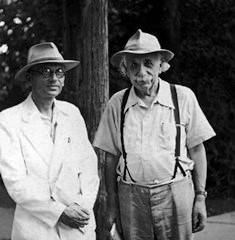 Knight writes, “The details of the mathematics involved in Gödel’s ontological proof are complicated, but in essence the Austrian was arguing that, by definition, God is that for which no greater can be conceived. And while God exists in the understanding of the concept, we could conceive of him as greater if he existed in reality. Therefore, he must exist.

“Even at the time, the argument was not exactly a new one. For centuries, many have tried to use this kind of abstract reasoning to prove the possibility or necessity of the existence of God. But the mathematical model composed by Gödel proposed a proof of the idea. Its theorems and axioms — assumptions which cannot be proven — can be expressed as mathematical equations. And that means they can be proven.” 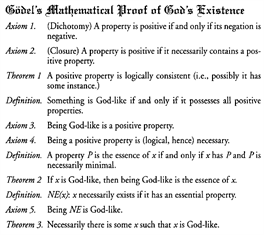 Kurt Gödel was an Austrian-American mathematician, philosopher, and logician. He was born in 1906 in the Czech Republic. He died in Princeton, New Jersey in 1978, having befriended Albert Einstein and other notable scientists. After teaching at Princeton, Gödel was institutionalized, thinking his food was poisoned. Gödel is best known for his work in recursive axiomatic systems and incompleteness. From these systems scientists derived Gödel numbering. Additionally, Gödel was a believer in God and sought various proofs for God’s existence, one of which is the theorem the German scientists have recently verified.

For more information on Gödel I recommend three works that are both enjoyable and fairly approachable: Gödel: A Life of Logic by John Casti and Werner DePauli; A World Without Time: Gödel and Einstein by Palle Yourgrau; and Gödel, Escher, Bach: An Ethernal Golden Braid by Douglas Hofstadter.