Get Ready for Lockdowns Until Election 2020 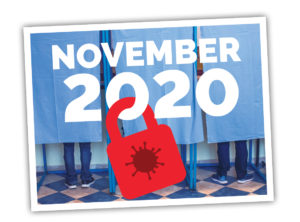 More than 60,000 new cases are confirmed each day. The Centers for Disease Control and Prevention (“CDC”) estimates more than 3.7 million cases in the U.S., the highest of any country in the world.

Major outbreaks in states like Texas, California, and Florida have meant politicians are imposing stricter anti-virus measures and taking large steps backward from reopening. Los Angeles is on the brink of another shelter-in-place order. And in my home state of New York, Gov. Andrew Cuomo has threatened to shut down even outdoor dining because of alleged non-compliance with his social-distancing executive orders.

Like wayward children, the people of New York City are threatened with yet another period of near-total lockdown. Their crime: Wanting to live their lives.

Meanwhile, Cuomo continues his dishonest campaign of pandemic self-praise… “They will be talking about what we did for decades to come,” he gloated last week.

He largely ignores the fact that New York and New Jersey have had by far the worst total and per-capita death counts of any states in America. And New York City still holds the title for the single-largest loss of life to COVID-19 of any metropolitan area in the world. But Cuomo is taking bows.

U.S. infectious disease chief Dr. Anthony Fauci even recently said in an interview that, “New York did it correctly.” While he meant the city’s approach after the pandemic had spread far and wide, even that goes too far in holding Cuomo as an example to follow. It’s like believing the general who loses a vast number of his troops in a war’s first offensive is a genius, because after that, most of the losses will be the other generals’ troops.

Among the fiercest COVID-19 debates is whether to reopen schools this fall.

Some big blue states – California and New York – will be either entirely or partially “distance learning” only. Teachers unions, staying true to their usual habit of acting like unregistered Democrat Party Super PACs, are holding school districts hostage. Depending on the state, their demands range from more pay and benefits, to outlandish COVID-19 safety procedures, to extreme left-wing agenda items like defunding the police. One thing they clearly aren’t prioritizing: millions of kids who should be in school.

For those making the COVID-19 safety argument about schools, neither the facts nor the science are on their side. In 2020, schools were open for months in the U.S. with COVID-19 spreading all across the country. Around 30 children under the age of 15 died from (or with) the disease. Substantially more died from seasonal influenza during that period, for which nobody is seriously considering shutting down schools (at least not yet).

If schools aren’t open, millions of parents can’t go back to work. The economy cannot pick up. Entire industries will remain on life support. And ultimately, it will be impossible for a real recovery in America – not just of the economy, but of daily life – to take hold.

This is all about politics. People can point and shame strangers for not wearing masks, but the simple fact is that this virus is going to continue to spread in America and around the world whether everyone wears a porous piece of cloth over their mouth or not. California is a Democrat monoculture, with very high mask compliance – and the state has been hit very hard by COVID-19 this summer.

Nobody has any real answers about what to do next, including a public health establishment whose biggest contributions to the debate so far have been telling us to wash our hands and stay away from other people. Add lockdowns to the current wave of COVID-19 panic, and you have a recipe for more civil unrest and economic devastation.

The good news is that we are likely moving toward herd immunity, we are just doing so with the maximum amount of corruption, hypocrisy, and stupidity from our political elites.

We will make it through this virus, as human beings have beaten all pandemics in the past. That COVID-19 has a higher than 99% survival rate for those infected seems to be drowned out in a political discourse that seeks blame over solutions.

Opponents of President Donald Trump know this is their moment to attack. Their most hated political adversary is on the ropes, swinging wildly without effect. The Democrats plan to keep schools closed, businesses on lockdown, and America under house arrest until election day.

Only in November, after a weary and desperate American people elect Joe Biden, will we begin to be told there is a future after COVID-19.

A lot of powerful people want you to believe that only Joe will make it so you can hug grandma again. That’s the essence of the Biden campaign. It’s cynical and despicable… But it’s working.