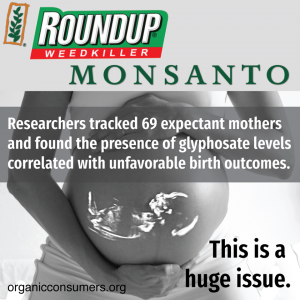 (NaturalHealth365) New data was recently presented at a children’s health conference warning the public about the grave dangers of glyphosate, the active ingredient in weed killers like Roundup and similar herbicides.

When glyphosate gets into the systems of expectant mothers, the risk of a number of adverse outcomes rises. These include lower birth weight, shorter gestation times and additional risks to the health of both the child and the mother.

Babies exposed to glyphosate at increased risk for neurodevelopmental issues

The recent study looked at 69 expectant mothers receiving prenatal care at an Indiana obstetric practice. Glyphosate was detected in the urine of 63 of the 69 pregnant women – a stunning 91 percent. It was also found that the presence of glyphosate made it far more likely that they would have unfavorable birth outcomes.

The women were tracked over two years and it was determined that high amounts of glyphosate were linked with much shorter pregnancies as well as babies with low birth weights. These factors are known to give children a more difficult start in life and raise the risk of neurodevelopmental issues and other health problems going forward, even into their adult years.

The research is part of an ongoing project overseen by the Children’s Environmental Health Network (CEHN). This group has been studying the impact of herbicides on reproductive health as well as newborns and young children.

It was also determined that women who resided in rural areas tended to have higher glyphosate levels than those who lived in urban or suburban neighborhoods. It’s no surprise that living close to areas where soybeans and corn are grown and treated with herbicides containing glyphosate dramatically increases the risk of exposure to these chemicals.

Based on their findings, the researchers call the effects of glyphosate exposure a “huge issue.” This is the first study of its kind to assess the effects of herbicides like Roundup on the health of expectant mothers and their children.

In 2015, the World Health Organization (WHO) International Agency for Research on Cancer (IARC) named glyphosate a “probable human carcinogen.” Past studies have also connected glyphosate with cases of multiple myeloma and non-Hodgkin’s lymphoma. In addition, chronic glyphosate exposure – even at low doses – has been linked to kidney and liver problems.

Monsanto and the EPA continue to downplay glyphosate dangers

Exposure to the weed killer, sold under the brand name Roundup, can cause DNA adducts – an alteration in the genes that’s linked with an increased cancer risk. Monsanto, maker of the Roundup product, has since tried to discredit these findings despite strong evidence of the health risks. In fact, the New York Times reported on the collusion between Monsanto and the EPA to suppress findings linking glyphosate to a higher cancer risk.

No doubt, the dangers of glyphosate keep piling up. The government and Monsanto need to stop undermining testing efforts and start taking action that’s in the interest of public safety. For now, you can minimize your glyphosate exposure by always eating organic and staying clear of farms where these toxic substances are sprayed.