God Can Wield a Mighty Blow with a Crooked Stick 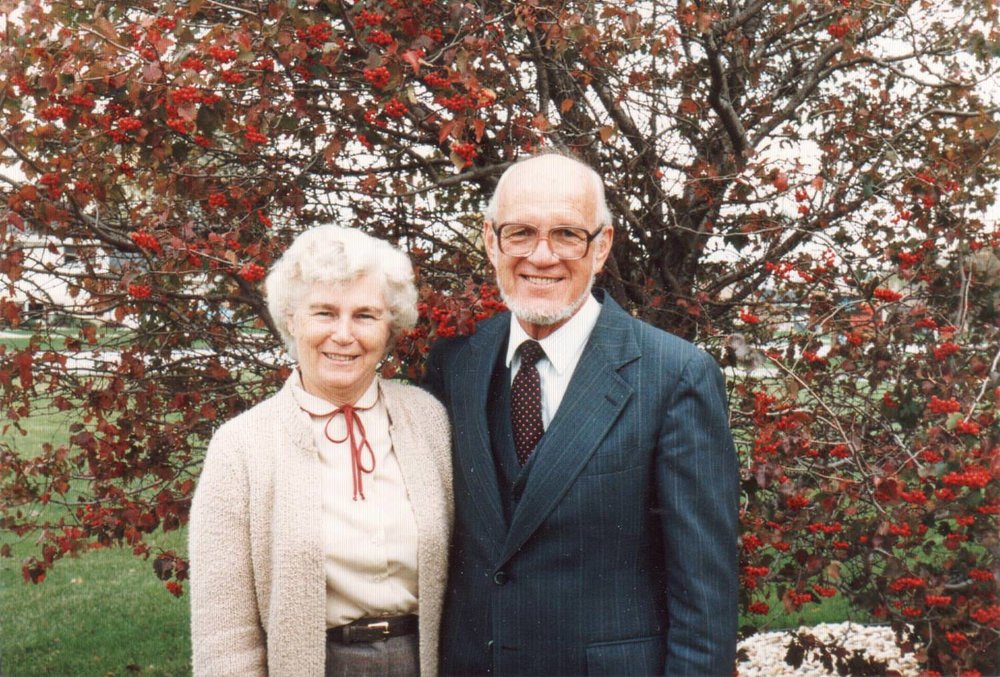 ESCONDIDO, CALIFORNIA (ANS) — Where does one start to share about a man who made such a difference in so many lives? My father said many times that he believed God could wield a mighty blow with a crooked stick and that God can swing a very large door on a small hinge. He was indeed a humble man. Not only did he believe God was able to use a crooked stick like himself, but God could also use a humble man as a small hinge to do a mighty act. This was my father’s passion — that he could and would be used by God for His purpose.

When I was growing up as a missionary child deep in the rain forest of southwest Ethiopia, I saw a lot of things other kids didn’t see. When I look back on those days and the days that followed, the most amazing thing I saw was a whole tribe of people turn from the traditional religion they practiced for centuries, to Jesus. Nearly the whole tribe came to know Jesus as their personal Lord and Savior.

Late at night I would lie in my bed in the pitch-dark listening to the night sounds.  I could hear the eerie noise of the dancing and wailing at the nearby village.  The sound of the drums, feet pounding and mourning would rise up above the rain forest in a single lonesome voice that I could hear from my bed.

In the rainforest lived a group of people who spoke the Majangir language. These people had never heard the name of Jesus before. Our family was their first exposure to the Good News.

Every Majangir man I saw had a comb of healed scar tissue across their forehead. They would inflict these scars upon themselves during burial ceremonies.

When a person died in the rain forest they were buried like others, but the ceremony they would hold was a mystery to me. With their spear’s wooden shaft pointing up into the dark night sky and the blade pointing down they would slash their foreheads until blood ran down their faces.

Why would grown men dance and cut themselves the way they did? They did not know Jesus and his promise of eternal life. They were lost.

Today, the Majangir men no longer cut themselves as they mourn. They, like many others, have heard and accepted the Good News that put an end to that behavior.  Ninety percent of the Majangir people are Christian now, but it took a man and his family from a faraway land willing to walk ten days into the rainforest to make it happen.  My father was that man.

Long before we went into the Ethiopian rain forest Harvey committed his life to Christ at 14. After being in the hospital for 45 days and having gone through three major surgeries, Harvey’s folks were told there was little hope. At that time my father committed his life to Jesus for the purpose of preaching the Gospel. He recovered and Harvey committed to spend his life looking for people who had not heard this Good News about Jesus and give them an opportunity to hear. And that is what he did with his 97 years here on earth.

Harvey’s lifelong journey resulted in the formation of the Talking Bible ministry now blessing millions around the world with personal access to the precious Words of the Bible. This was Harvey’s passion, to give people access to the Bible, especially those who cannot read. 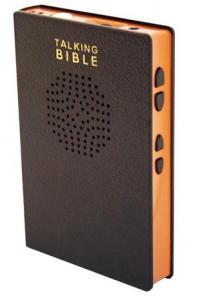 In the same plane that came to fetch my folks for the last time from the mission station and people they had come to love in Sudan, were the first five copies of the Printed New Testament Harvey had translated. Our family had been expelled from the Sudan along with all the other missionaries. That was 1962.  The words said on that final day were God’s special blessing for the hard work and sacrifice the family made. As my father opened the small packet and gave it to the church leaders they responded with these words. “We do not know why our government has asked you all to leave our country, but we want you to know you have given us this very precious gift from God — His own Word in our language.” With that, the tears flowed and everyone said goodbye.

For 65 years the Anuak people used that New Testament my father translated into their language.  In 2017 the entire Old Testament translation and a revised New Testament was completed by others in the Anuak language. But it all started with a man and his family willing to go to what was literally the ends of the earth at that time.

“Honey We’re Going to Africa,” a book Harvey wrote, tells of these early adventures of a young missionary family in Sudan and Ethiopia. Harvey read the entire book himself for a special recording.  You can listen to it at www.talkingbibles.org/knotted-strings/.

In 2010 Harvey was able to return to Ethiopia for the dedication of the Majangir Talking Bible. People walked days to see “Odola”. That was the name they gave my dad. Thousands of people young and old walked many miles to see him.  When the plane landed, they surrounded it. Most had never met him and wanted to see him.  They pushed forward just to see the white man who had dared to come to tell them about Jesus so many years ago. 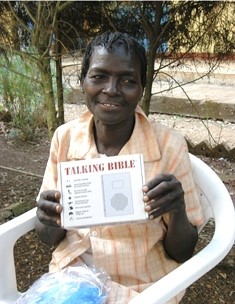 One of the first converts was there, a young girl, a friend of my mother, by the name of Argeem, who had visited her mother’s village when just a child with a cassette player and the Good News about Jesus. Argeem’s mother and twelve other women believed Argeem’s testimony and the exciting news the cassette player bore witness to. When she heard my mother had died, she wept openly, tears running down her face. Argeem was not the only one who cried that day, nor was she the only one to walk off into the rain forest many years ago for a distant village with a cassette player under her arm. That is how most of the Majangir first heard the Good News.  New Majangir believers shared the Good News with their friends and family using cassette players with carefully crafted messages in the Majangir language and their own personal testimonies.

The very first Talking Bible ever made was actually made for my father. Now they are all over the world in many different languages. But the very first one was made selfishly by me for my father who we thought was dying in the hospital in Pasadena. This was 1997. He had pneumonia and was very sick. He was unable to read or operate a traditional cassette player so I made him a Talking Bible! I took all of the audio that was on the twelve cassettes that made up the New Testament and put it on a single cassette. I modified a cassette player to play that special cassette and sealed it into the cassette player I made that looked like a Bible. I still have it in my office. I made it easy for him to access the Word of God because he couldn’t read it for himself.

My father got well and left the hospital with a new energy to make sure this new listening device, a Talking Bible, was made available for the many who needed it. The world is full of people who cannot read. Harvey’s passion continued — to give people access to the precious words of the Bible. He labored the rest of his life to share God’s Word with non-readers. 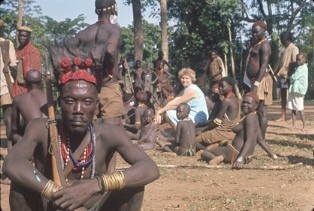 Lavina with the Majangir people in 1964

Harvey was born to Jake and Fannie Hoekstra of Maple Lake. Harvey passed away in Escondido, California.  Harvey and his wife Lavina served as missionaries in Africa and Asia with the Reformed Church of America for 40 years. Lavina preceded Dr. Hoekstra in death in 2010.  Harvey has 17 grandchildren and 18 great-grandchildren.

Mark S. Hoekstra, Harvey’s son, currently serves as the President of Talking Bibles International, based in Escondido, California.  Mark, his wife Sandy and family came to California in 1990 to help his father, Dr. Harvey Hoekstra, start a ministry called Audio Scriptures International — now known as Talking Bibles International. Mark and Sandy have been married for over 36 years.  They have four grown children and six grandchildren.  Sandy has been a faithful partner in the ministry and helps with the partner relations of the ministry.

Mark became President of the ministry in 1997 when his father retired.  That same year, God gave Mark the vision to create the Talking Bible. It is the only audio Scripture player that looks like an actual Bible. In 2014, Talking Bibles introduced the Solar Talking Bible which uses the sun as its source of power.

Talking Bibles currently provides audio Bibles to non-readers living in India, Ethiopia, Sudan and many other countries.  The Talking Bibles ministry has over 130 languages in which audio Scriptures are available via Talking Bible players and the internet — www.talkingbibles.org.

Talking Bibles continues to record new languages in which the Bible has been translated.  There are over 1 billion people in the world who cannot read and have never heard the name of Jesus.  As we move forward with placing Scriptures with non-rea   ders who are unreached by the gospel, we pray the Lord will bless the hearing of His precious Word in areas of extreme spiritual darkness.

The rest of the story can be found in Harvey’s book, From Knotted Strings to Talking Bibles.

Visit www.talkingbibles.org to see what God is doing with the ministry that Harvey started, and listen to the book he wrote, read by Harvey himself.