God’s Chosen People, The Israel of God and Romans Chapter 11 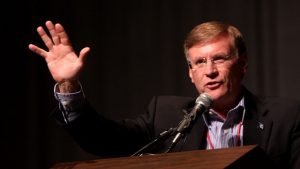 Liberty Fellowship began in January 2011 in Kalispell, Montana, as a non-501c3 church under the pastorship of Dr. Chuck Baldwin.  He is currently focusing on his much-anticipated Prophecy series.  His first message was, “An Overview of the Primary Eschatological Interpretations”.  He shows the crucial differences between “Israel-based” and “Jesus-based” prophecy doctrines.   His second message was on, “Daniel’s Seventy-Weeks Prophecy:  Where Are The “Rapture” and “Seven-Year Tribulation”?  This message shows Scriptural reasons why there is NO “gap” in between Daniel’s 69th and 70th weeks. This truism, by itself, demolishes the cornerstone of the false prophecy doctrines of Christian Zionism–including the false “Rapture” theory and the false “Seven-Year Great Tribulation” theory.

Pastor Baldwin will be delivering his third message during Liberty Fellowship’s 11th Anniversary on January 16, 2022.  The title is, “God’s Chosen People, The Israel of God and Romans Chapter 11”.  We hope many will listen in to the service at libertyfellowshipmt.com at 4:30PM EST.  You WON’T be disappointed!!