Gold Mine: Diamondbacks’ Paul Goldschmidt finds Jesus through love of others 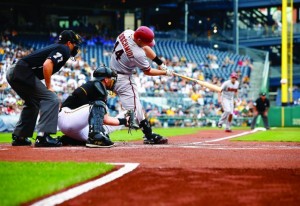 Paul Goldschmidt has a reputation for humility almost as large as his renown for terrifying National League pitchers. Despite prodigious numbers (good enough to merit second-place finishes in National League MVP voting twice) he quickly credits hard work rather than natural talent for outstanding performance that has experts considering him, with Bryce Harper, Mike Trout and others, in conversations of who’s the best in baseball currently.

In his own conversations, baseball and his accomplishments take a backseat to admissions of relative youth in his Christian walk, old misunderstandings of what it is to be a Christian, times when he feels he falls short, and praise for teammates and others who have impacted him in his faith. It’s left to others like Brian Hommel, the Arizona Diamondbacks team chaplain, to provide details of a life being lived that should be emulated by most mature Christians.

Goldschmidt, for instance, is reading the Bible straight through. He and wife, Amy, visit the Phoenix Children’s Hospital so often they have visitors’ credentials to come and go whenever they like. He makes no mention of speaking in churches and events like “Tales from the Dugout,” a baseball counterpart to a hugely successful Tales from the [PGA golf] Tour, an outreach ministry in Phoenix that has hosted as many as 4,000 attendees. And he was, perhaps, Hommel’s best student in a season-long study of the Book of Romans and led the final chapel service of last season.

It’s almost shocking to discover the man who hammered 33 home runs, while batting .321 in 2015, and earned a Gold Glove at first base, was, relatively speaking, overlooked by scouts coming out of Texas State in 2009 as a ninth-round pick. They believed he needed to correct his long swing and defense. Consider, with the above stats and Gold Glove, correction accomplished. Plus, Goldschmidt even has developed an ability that is typically an afterthought for 6-foot-3, 225-pound hitters: base stealing, as evidenced by 21 steals in 2015.

The surprises in athletic history are matched equally by an unusual religious background atypical for a Christian: his father was Jewish and the grandson of parents who left Germany in the late 1930’s to escape the Holocaust. His Mother, a Catholic, raised Goldschmidt in the church, but he admits it was never a priority or something meaningful in his life.

Hommel describes Goldschmidt as “a good humanitarian” but one who initially approached Christianity with negative perceptions. “He didn’t understand the point of following a belief system when he, himself, was a moralistically good person.”

“Without ever getting into the Bible and reading, I was making judgments,” explains Goldschmidt. “Just one example: I’m thinking so-and-so is a Christian and I’m looking at the mistakes they’re making. But when you read the Bible, every single person you know on this planet that’s ever walked has made a mistake, and every single person that God used in the Bible was a sinner.”

Encounters with “sinners saved by grace,” specifically other Diamondbacks’ teammates and their wives in an off-season couples Bible study, led to his relationship with Jesus Christ. The people he encountered and “the way they treated people and the love they showed everyone and their openness,” according to Goldschmidt, was what touched his heart. “It was a slow process, but I wanted to know more about these people; why were they so full of grace and everything that Jesus showed in His life?”

“We just loved on him, and it wasn’t because he was Paul Goldschmidt, the baseball player. That still speaks to him today,” says Hommel, who organizes and leads the off-season couples’ studies as well as chapel services and Bible studies for players during the season. “The idea with the study is just being open and honest. Whether it’s me or Ian [Kennedy, a former Arizona teammate who is playing for the Kansas City Royals this season] or any of the other couples, we just openly share about our struggles in life, our journey with God, and our relationship to our spouses.”

Hommel added that the main thing in the study is that everyone there simply cares about each other. “Obviously that was something that spoke to Paul and Amy, especially Paul, that it was a safe place.”

The couples’ study has been complemented by the team chapel services and Bible studies with other players during the season. Goldschmidt recounts a meeting on a road trip with players from the home team: “We were talking about, what is your story? How did you come to know Christ? When that question got asked, I’m thinking someone’s going to say this pastor spoke this verse to me or this guy brought me a Bible and I started reading it. With every single person that was in the room, it was somebody else in their life that had, essentially, loved them.”

In addition to Hommel and Kennedy, several others have been instrumental in Goldschmidt’s life.

Goldschmidt credits Arizona Diamondbacks hitting coach, Turner Ward (above), with influencing him in his faith.

“Turner Ward is our hitting coach and was my manager in Double-A,” Goldschmidt says. “He is maybe the one who I work with on a more personal basis. He’s taught me so many things and still does. We’re doing Bible studies together where he’s mentoring me. This past year we had Andy Green [former third-base coach of the D’backs and current manager of the San Diego Padres] as well. He’s another guy who really helped me understand what I was reading in the Bible and hopefully will for the rest of my life.”

Understanding is something pursued as assiduously by Goldschmidt as the maximum lead to take off first base to gain an edge stealing a base, or shortening a batting stroke to hit a low-and-away slider. “He’s a student at heart,” says Hommel of Goldschmidt. Referring to the Book of Romans, which was the sole biblical focus for the D’backs in the 2015 season, Hommel admits he didn’t know how well the players would respond. “A lot of them are very new in their faith or just trying to figure it out. We got to the heavy stuff in Romans 9, 10 and 11 and he [Goldschmidt] was just a sponge.”

Interestingly, given his Jewish ancestry, Goldschmidt downplays any unique perspective on Christianity and the Bible that he might be expected to have. “It’s a bigger deal to other people than it is to me,” he says of his background. Instead, he approaches the Bible influenced by neither Judaism nor Catholicism. He studies passages in the Old Testament as much as the New Testament to get what he calls the “parallels” and appreciates the connectedness of both testaments.

Goldschmidt’s grasp of all of the Word is having an impact still to be fully realized in the life of the 28-year-old entering his sixth season with Arizona. As he’s become a leader on the team through performance and a work ethic that very few, if any, can match, he’s also becoming more open about his Christianity. His humility predictably surfaces in talking about it:  “I try to do as much as I can, but unfortunately we’re all selfish at certain times, and I could do a better job of it.”

Brian Hommel would probably beg to differ. “He’s speaking up more in the chapel and the Bible studies than he has in the past. I think that as that continues to grow, I think you’ll see him more vocal about his faith as he understands more of who he is in Christ.” In their one-to-one relationship, Hommel says his challenge in ministering to Goldschmidt has been empowering “Goldy” in his leadership role on the D’backs and on the public stage. Even as a relatively new Christian, Goldschmidt has, according to Hommel, “done a really good job of just sharing Jesus with people and coming alongside them.”

Hommel might be, aside from Goldschmidt’s wife, the perennial all-star’s biggest fan.

“He’s basically in the top two or three in the MVP battle every year,” Hommel says. “To have that kind of stature, but yet to deeply care about other people and their lives, and not to make it about him, that’s just not normal in the game of baseball. Even among Christians there are just a handful of guys like that.”

Perhaps it could be said that the “moralistic humanitarian” has discovered, as Micah 6:8 says, “what is good” as shown to him by God, meeting as best he can the Lord’s requirements “to do justly, love mercy and to walk humbly” with God.