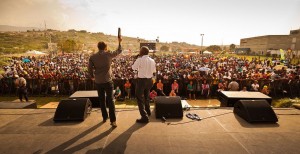 Just two weeks after the results of the Presidential election sparked an extended period of widespread political unrest, thousands of people gathered in the heart of Haiti’s capital city for a free, city-wide outreach festival featuring evangelist Andrew Palau. The event, known as Le Chic Poulet Fun in the Son Festival with Andrew Palau, was a collaborative effort between the Luis Palau Association, Haiti Broilers, and hundreds of Christian churches. The goal was to foster hope in the Caribbean nation and to share the Good News of Jesus Christ.

Many evangelistic events and service projects took place throughout the city in the days leading up to the major gathering. From November 7 until November 14, gatherings were held for business and civic leaders, women, children, prisoners, and more. The week concluded with the gathering of thousands in the heart of Port-au-Prince and featured popular local musical artists, professional BMX athletes Vic Murphy and Jon Andrus, freestyle motocross champions Justin Homan and Derek Garland, a special program on the main stage just for children and families, and a message of hope from Andrew Palau.

“In the midst of great unrest due to the election process, the festival venue was such an oasis of peace,” Festival Director Randy Burtis said. “We all were grateful and amazed for the peaceful and joyful atmosphere of the festival in the midst of the pressures of the season of great transition that the people and the nation are in.” 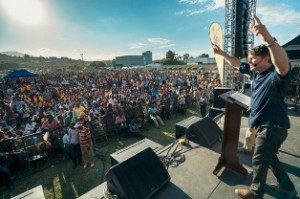 The crowd was joyful and exuberant as they marveled at the high flying stunts from FMX and BMX athletes and danced along to the upbeat musical performances. As Andrew shared about the loving intent of Jesus Christ for their life, to provide abundance in life, as described in the Bible in John 10:10, hands were raised across the crowd representing those who had made a decision to respond to the call to believe in and follow Jesus.

“It is a joy to be part of this incredible work of the Gospel in this land we love so dearly and with our friends and partners,” Andrew Palau said of the campaign. “We saw many victories in Jesus’ name! Changed lives! God is moving powerfully in Haiti and there is much work still to be done. What a privilege to get to play our part!”

By the end of the week, more than 2,300 individuals had registered a decision to follow Christ. Each decision maker received a Bible and discipleship materials and are in the process of being followed up by one of the 600 participating local churches.

The midweek outreach events included an evangelistic dinner for business and civic leaders as well as one for women. In addition, volunteers from the United States worked with locals at clinics to provide free reading glasses for those in great need. Volunteers also led outreach events at schools and in orphanages. Additionally, Andrew, musician Zach Blickens, and the BMX athletes held a mini-festival, as they have done on each visit, in the Port-au-Prince Penitentiary.

“God used this festival in a mighty way to touch hearts and impact lives,” Monique César Guillaume, the head of the local committee that planned the women’s dinner, shared after the event. “I am still receiving testimonies of many women explaining how they have been blessed, how they have been touched, and how your testimony gave them strength to go through similar trials.”

This year’s effort marked the third Andrew Palau Festival in Haiti and he will be back in the new year as he joins evangelist and friend, Reid Saunders, for a series of similar outreaches in smaller towns and villages on the Haiti and Dominican Republic border. The Palau Association enjoys a fruitful partnership with the Jamaica Broilers Group which includes Haiti Broilers, the festival’s corporate sponsor. The company has played an instrumental role in hosting many island-wide campaigns in Jamaica and Haiti, including the 1993 Luis Palau Crusade in Kingston, Jamaica where Andrew Palau himself first accepted Jesus Christ into his life in response to the preaching of his very own father, Luis Palau.

“It has been another tremendous honor to once again serve with the Palau team in the recent hosting of the third Fun in the Son (Haiti),” Jamaica Broilers President and CEO Christopher Levy shared. “We look forward to a continued relationship with the Palau ministry for the benefit of the Kingdom and for His glory.”