Gospel in EVERY book of the Old Testament. Surprised? Author explains why he was not shocked to find it in all 39 books 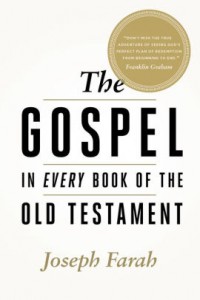 I’ve told the story of why I began searching for “The Gospel in Every Book of the Old Testament”– the title of my imminent release in hardcover and a book available now in e-book form.

After more than 40 years of Bible study, both independently, with my wife, Elizabeth, and under the guidance of some great teachers, I was so certain it must exist in published form – at least in the form of hints, foreshadows and, of course, through previously well-documented revelations – that I began to search for such a book. I wanted a book I could consult as a guide for my own purposes, one I could use to lift my own spirits, one I could read to inspire my own study of the Old Testament. I was aware of some excellent books that identified dozens of glimpses of Jesus in the Hebrew Scriptures. But I could not find any existing systematic study of the Good News of redemption in all 39 books.

That’s when I devoted myself to examining each of them – from Genesis to Malachi – with just that in mind, often calling on the Holy Spirit to guide me through this exciting challenge.

Was I shocked to find exactly that for which I was searching? Not at all. I strongly suspected I would, because I had already found the Gospel in most of the Hebrew Scriptures before. The only thing that surprised me was why the book didn’t already exist after nearly 2,000 years of study, after thousands of books about the Bible had already been written, after all the voluminous work of academics, after all the sermons and guides and teachings.

Certainly, it was no surprise that the Gospel was there, nor even that it was prevalent.

From the days of Augustine, it has been widely acknowledged through the church that the New Testament lies hidden in the Old and is revealed in the New. I knew that much from reading the Catholic Catechism as a child.

Further, it seemed logical if we accept what we’re told in the New Testament as truth. John 1:1-3 says: “In the beginning was the Word, and the Word was with God, and the Word was God. The same was in the beginning with God. All things were made by him; and without him was not any thing made that was made.” If one needed further reassurance that Jesus is and was the Creator of everything, it comes unambiguously in Colossians 1:16: “For by him were all things created, that are in heaven, and that are in earth, visible and invisible, whether they be thrones, or dominions, or principalities, or powers: all things were created by him, and for him:”

Of course, we’re also told in Hebrews 13:8: “Jesus Christ the same yesterday, and to day, and for ever.” How often do believers consider the simple biblical assertion that Jesus – the One who came in the flesh to tell us the Good News of redemption and salvation – is One and the same as the Creator of heaven and earth? Why should we not expect that He would have laid the foundation for the Gospel that He, the One whom we know as the Word, would later preach in the flesh through the law and the prophets and all of the sacred literature of the only Scripture of that time?

It was with all that in my mind and spirit that I set out to research and write a book that seemed to me needed at this time in our world – a reminder of just how integrated is the entirety of the Bible, how perfect it is, how miraculous it is.

I’m truly humbled that the Holy Spirit enabled and empowered me to undertake it and follow through to completion. Without question, it is the most meaningful assignment and project in which I have ever been involved.

I’m sure I’m not the only one who was searching for such a book. Surely there are others – and I am encouraged by the reviews of dozens of scholars, pastors and others of great faith that have already found it useful – perhaps even something of a “breakthrough.”

But, most of all, I pray that it is used to bring others to faith, to salvation, to a living knowledge of the redemption of our planet upon the imminent return of Jesus the Messiah, the King of kings, Lord of lords, the Son of God.