Public Education Will Be Biggest Beneficiary! Many have already opted out! 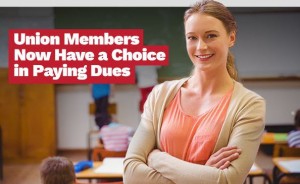 Providence, RI – In recognition of National Employee Freedom Week (Aug 19 – 25), and despite the state’s attempt to shield public employees from becoming aware of their rights, the RI Center for Freedom & Prosperity today launched its My Pay My Say RI public awareness campaign on its MyPayMySayRI.com website.

The campaign is designed to inform public servants of their recently restored first Amendment rights, as ruled by the U.S. Supreme Court in the landmark Janus v AFSCME case. A consistent champion of constitutional rights for all citizens, the Center believes public employees deserve to know that they now have full freedom when it comes to deciding whether or not it is in their best interest to pay union dues; and that they cannot be recriminated against if they choose to leave. Prior to the Janus ruling, all state and municipal employees in Rhode Island were forceed to pay their government-designated unions as a condition of employment.

However, the Supreme Court has decided that because it is their pay, union membership – or not – is rightfully the say of every public worker; especially when workers may disagree with their union’s political advocacy, which is paid for with their dues money.

Case in point is Michelle, a municipal employee in the Ocean State, who opted-out right after the Janus ruling and who said: “I don’t understand why some of my friends continue to pay their dues despite their political views being completely opposite of what the union supports.”

The Center has partnered with the $10 million national education and outreach campaign, My Pay My Say, to launch a customized Rhode Island initiative. “Despite the governor’s and the unions’ efforts to keep public employees in the dark, our Center and our national partner have already accumulated tens of thousands of email and mailing addresses of government workers. We expect to contact them in the coming weeks and ongoing for years,” said the Center’s CEO, Mike Stenhouse. “We have raised enough money to fund phase I of our campaign, which will include thousands of direct mail pieces. The more money we raise, the more awareness we can create.”

The Center believes that public education will be the greatest beneficiary of the Janus ruling. Because unions can no longer force teachers who disagree with them to fund bargaining positions that tie the hands of educators, teachers will be empowered with a stronger voice to fight against ineffective policies.

The MyPayMySayRI.com website includes educational information for public employees, with a dedicated section for teachers, and will soon include information on the political spending of certain government unions. The website also includes a page for workers to tell their story if they have unsuccessfully tried to leave their union or have received unsatisfactory responses to inquiries of their employer or union officials.

“We respect each person’s right to make an informed decision. It’s unfortunate that unions and their government allies do not,” added Stenhouse. “Based on history in right-to-work states, unions will go to great lengths to obfuscate the truth and make it as difficult as possible for workers to exercise their rights. We have already been contacted by workers who were brushed aside when making honest inquiries about the Supreme Court ruling.”

The website further includes links to an opt-out page where an official letter, requesting exit from the individual’s specific union, can be automatically created and printed, as well as links to a page where individuals can indicate that they choose to remain in their union.

The Center’s multi-year ‘worker freedom’ campaign in the Ocean State had a soft-launch in July and, already, many public employees have opted to leave their union, deciding to keep more of their paychecks for their own families. Ongoing, the My Pay My Say RI campaign will include email, direct mail, traditional and digital advertising, as well as other outreach vehicles.

For more information visit the MyPayMySayRI.com