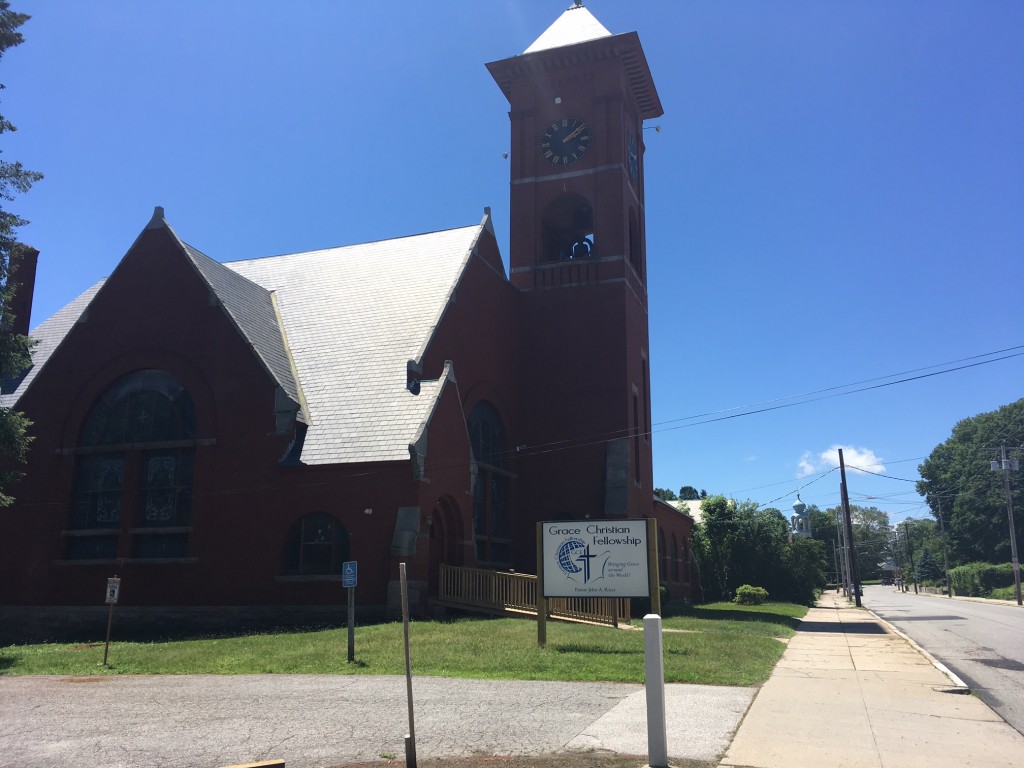 Grace Christian Fellowship has a new location in Woonsocket

Events of the last month have certainly gotten the attention of the nation, and frankly the world. The political divisiveness in our country and rising tension around the globe are making it harder every day to see a way clear to our children’s future. The seemingly obvious has been hijacked by political correctness, and at times, God and accountability seem distant concepts from a bygone era. And I don’t know about you, but the deeper I go to try and understand it all, the less it seems to make sense. Something is however, different for me these days. In fact the last three years of my life have allowed me to see things through a qualifying lens if you will. I’m learning to control the things I can and leave the rest to “Him”. I’m learning that for all my earthly ambitions and efforts in the direction of “the better angels of our nature”, in the end, it is Christ who saves us. It’s His whose voice I hear more so now than at any point in my life, and it gives me hope.                                                                                                                                                                                                                     Knowing that God is there has been a great source of strength and comfort for this restless and troubled soul. I remember not so long ago questioning the wisdom of starting a family knowing and experiencing men’s hearts and intentions as I have. But Jesus found me, by way of a loving wife, and a Pastor who knows his “Book” about as well as any teacher I’ve ever known. And though I continue to struggle with my personal role in the bigger picture, my interviews and writing for this publication have exposed me to the men and women of Christ, who ultimately do the heavy lifting when it comes to fighting the good fight here on earth. It has become my fall back when I’m frustrated by the daily barrage of negativity and ungodliness, to remember that those who God has touched upon their hearts with ministries of faith, are out there doing His bidding and spreading His word. Their lives, (in many cases by hard-fought and even fatal example), demonstrate that even in the face of so much human adversity as we are seeing in this tumultuous and relatively new century, mankind can make a difference and bring people to Christ. From the seemingly smallest of local efforts to the grandest of mission fields around the globe, they are finding the good and advancing the cause of His word, bringing us back over, but for one soul at a time if that’s what it takes. And while I know I’ve written this so many times in the past, I’m simply in awe of these pastors and purveyors of His will who tell me of their “hearts for God”. They are truly safe harbor in a storm…

Fundamentally, I suppose this “calling” begins with His word, and the men and women who bring it forward. Folks whom I’ve interviewed over the years have told me, that simply having someone bring “Jesus” to them, be it informally by way of a friend or family member who may be saved, or in a church worship setting, has helped them turn away from the sin in their lives and begin to embrace His grace and forgiveness. Truth be told, this was the case for me. Having someone explain His love, (over a period of many years), and then finding a Pastor to share the truth of the Bible and what it was really telling me about myself, made all the difference. To be clear, and as many of you have come to know of me, my journey was a long one. And it turns out that finding the right combination of church and Godly “interpreter” was more a matter of me opening my ears and closing my mouth. That said, it was most certainly those who shared their blessing with me that ultimately took me the rest of the way. To that end we see missionaries and Pastors filled with the purpose of the Holy Spirit, and going forward with the message of the Bible being the core of their individual ministries. It is their “mission”. It is their “ministry”. It is their “calling”… 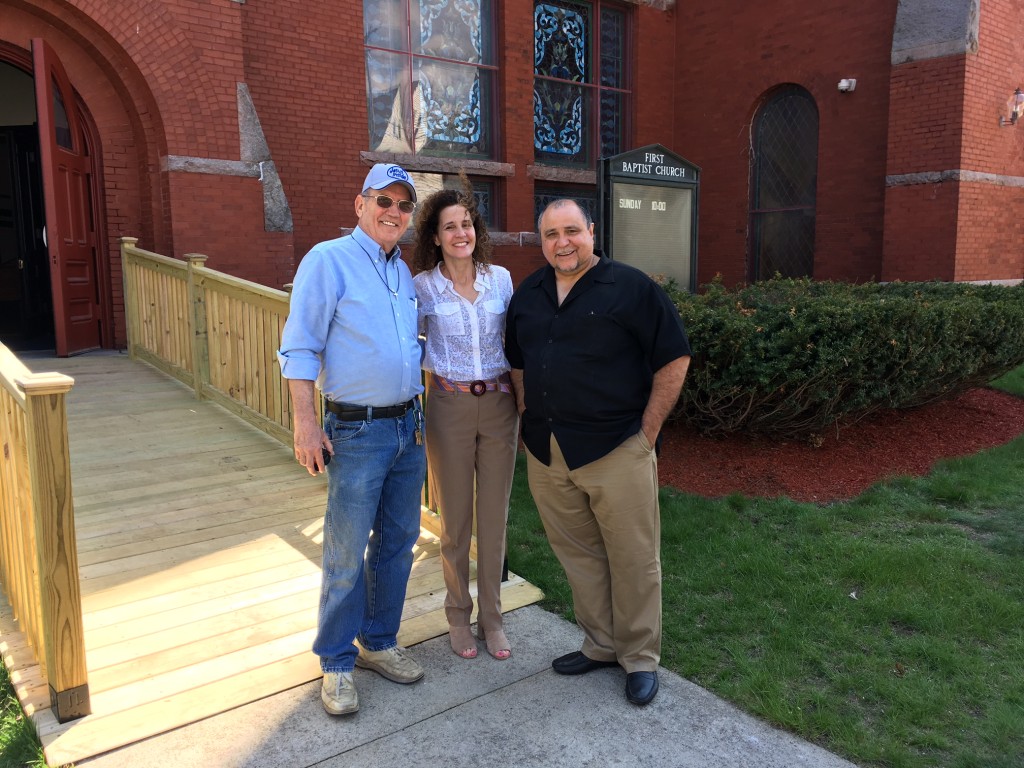 Pastor John A. Ricci was raised a practicing Catholic, but drifted from the church, not because he was an unbeliever, but rather like me, he was searching for something more from his faith. The now 58 year-old Pastor of Grace Christian Fellowship (GCF) graduated from the famed LaSalle Academy and was an altar boy at his church. So you might say he was no stranger to the faith. But wanting to understand that faith is a powerful draw which usually takes you far beyond where you may have gone as just say a “parishioner”. And as those closest to him, especially his family came to find the real meaning of Christ’s mercy and grace in “The Word”, that influence would inevitably foster the fire of ministry in a young man’s heart. Ricci would come back to God to be sure, and in a bigger way than even he might have realized at the time.

John Ricci would get saved and immediately feel that tug I’ve written of so often. In 1999 he began a Bible study that quickly swelled from 4 to 15, and ultimately beyond his homes realistic capacity as a gathering place. But as God would have it, John’s dad had retired to Florida but still owned an empty restaurant building on Woonasquatucket Avenue in North Providence RI. He offered it to his son for his burgeoning fellowship of likewise believers. And so it went, and after graduating from Freelandia Bible College, began the ministry of a man “recruited” in the aforementioned way, whereby Christ needed him to be who He wanted him to be and for His glory. Did ya get all that??

Pastor Ricci has been preaching the Word of God and serving at GCF since the doors first opened. He’s a member of the (Body of Elders) to include close friends and fellow believers, Craig DiPetrillo and Michael Izzi, and shares in the responsibilities of church leadership. I wanted to touch base with Pastor Ricci regarding the growing ministry efforts of GCF, and I was lucky enough to usurp a few moments out of his busy schedule recently. Per usual, I realized immediately I was talking to one of God’s facilitators, with a true heart for the Lord and the signature initiative of the Holy Spirit I’ve come to recognize in my interviewees. And I say growing ministry, because GCF is now beyond 120 or so followers in Christ and their families, and they’ve just purchased a new church in Woonsocket. 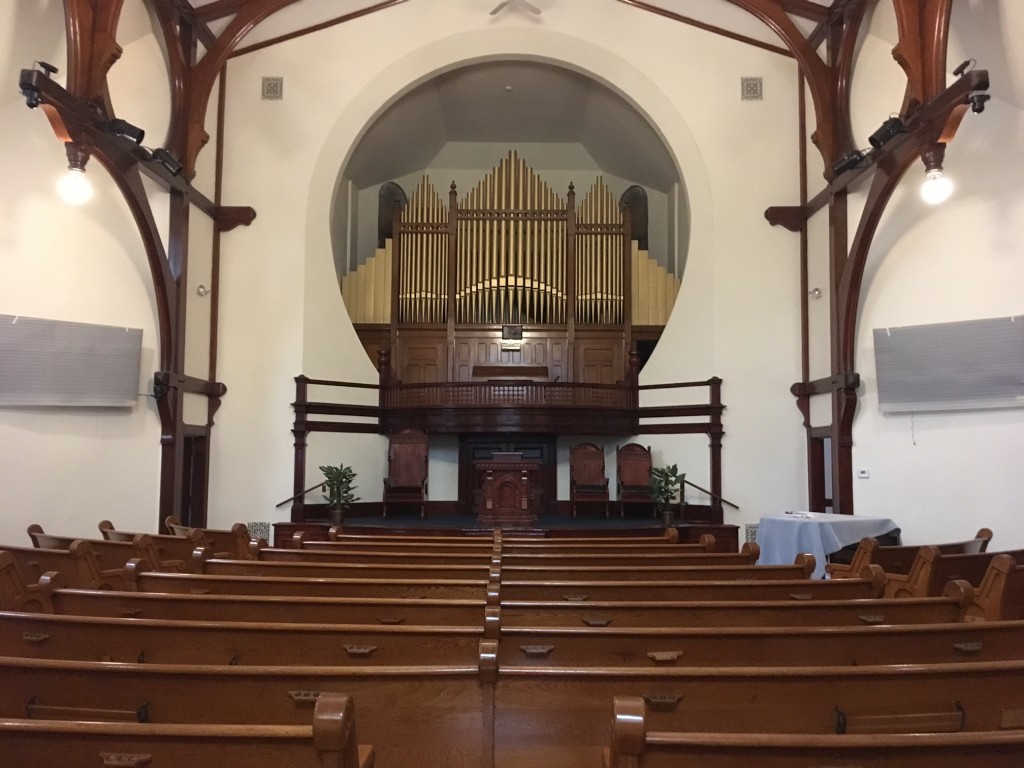 It turns out that after a long and exhausting search, which often left Pastor Ricci discouraged and seeking God’s direction, tired and weary of the process, he was begrudgingly convinced to look at one more potential purchase which turned out to be the answer to his query of God. The location, size, and scope of the building were perfect. And though in a fairly significant state of disrepair, GCF was able to muster the finances to purchase the building and began to renovate it. Using the talent, initiative and inspiration supplied to his growing congregation by the Holly Spirit, and while the work continues today, the doors opened at the new GCF this past April and the place is an incredibly beautiful testament to God’s goodness and glory.

With the new facility, and the promise of growth in His name, Pastor Ricci and I spoke of the future.
He explained to me that the goals of GCF are two-fold. First and foremost, to reach the lost with the Gospel of salvation through faith alone in Christ alone, (super important first step), and secondly, to build up and encourage believers in Christ, that they may grow spiritually and fulfill God’s plan for their lives, very much like the Pastor himself…  “The goal for every child of God should be to advance to Spiritual maturity and live a life that glorifies and honors God”. For what it’s worth, Pastor Ricci’s journey sort of mirrors my own in some ways, and reflects my understanding that this was the part I was missing all those years ago. It was never about me, but more so “the me” Christ wanted me to be. 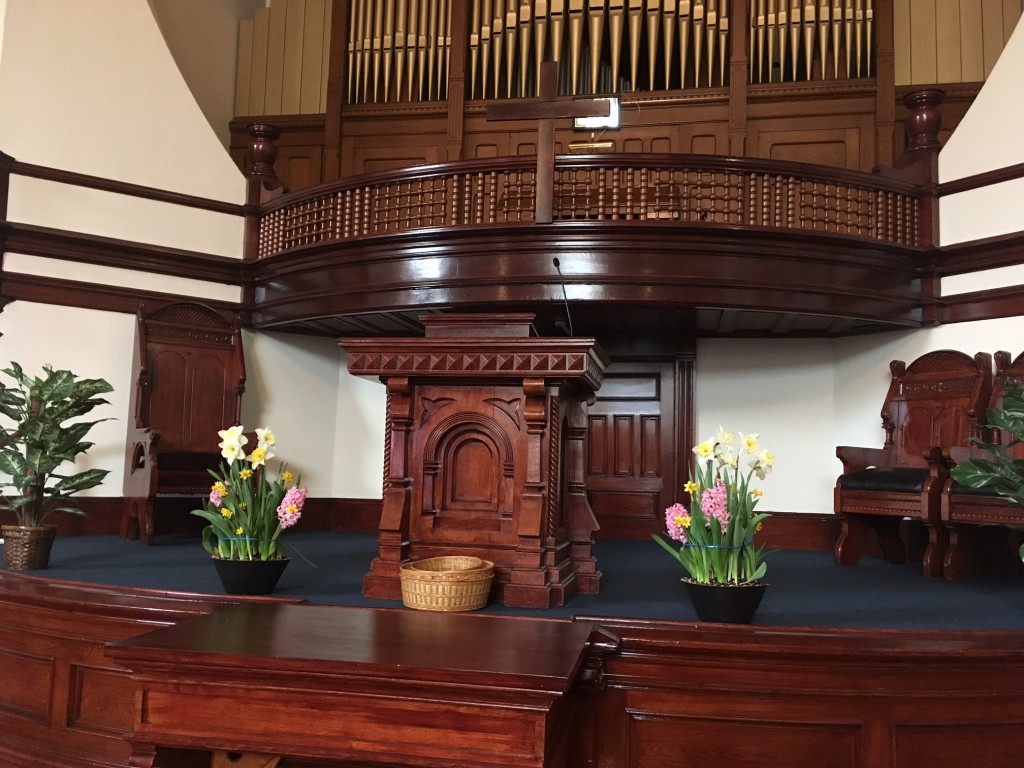 This is the aspiration that allows me to re-focus/re-purpose when I’m emotionally and spiritually challenged on any given day. It just always seems that when I have His best interest in my heart, all else falls into place naturally. We talked some more about our faith in the 21st Century, and Pastor Ricci went on to tell me of the two major issues for which God will require a full accounting, those being: “What have you done with My Son?” and “What have you done with My Book, the Bible”??? Well???

I was struck by Pastor Ricci’s fundamental understanding of his faith, and how it translates into how we are, and frankly aren’t living our lives sometimes. The website for GCF has a great explanation of these fundamentals of faith and I encourage all of you to check it out at gracecfellowship.org/about.aspx . We spoke of modern technology and how it can actually be used for good, go figure… Pastor talked about GCF’s live stream and how he receives regular emails from Ireland, Canada, Sweden and around the world from people who are tuning into the church feed. 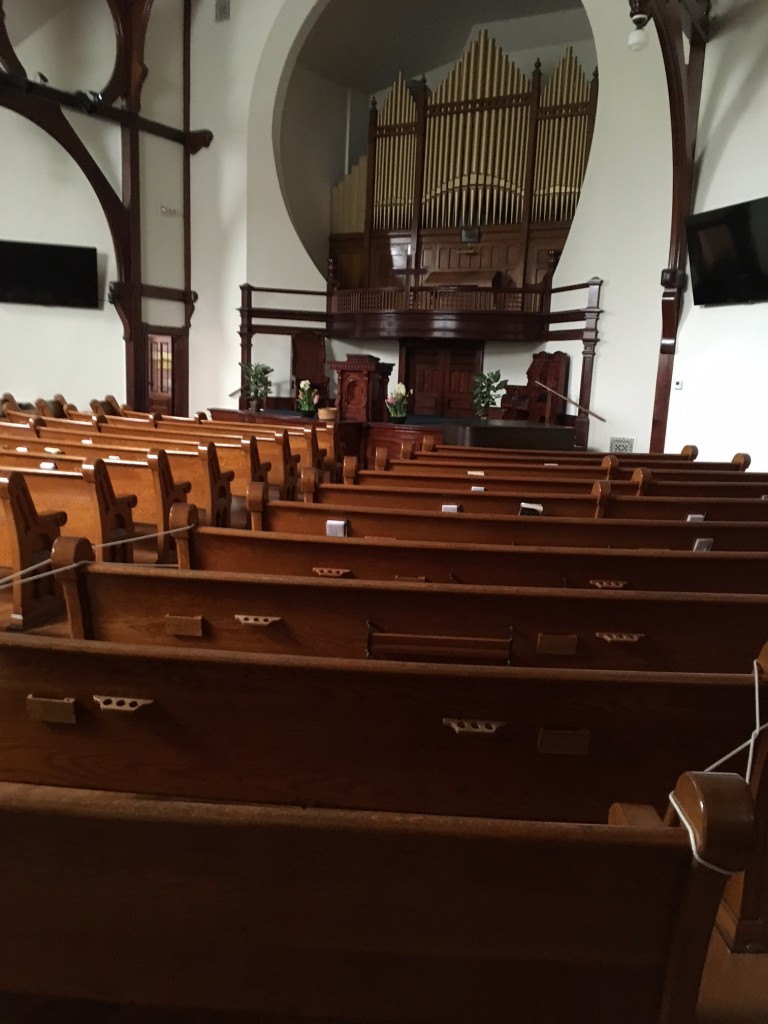 GCF is also reaching out by way of supporting other ministries like that of Pastor Teh Francis in Cameroon, where the acquisition of just a Bible of one’s own and a card board box to sit on during service seem the greatest of all gifts. Think about that the next time the church AC seems a bit warm he joked with me. Well said Pastor, well said…

Once again I was left hoping for a little more time with my story. But as you can see, God is filling John Ricci’s days accordingly. He thanked The Elders for their commitment, as well as Vic Simonin, his Head Deacon, and all the deacons and congregation members who’ve given of their time, money and labor intensive expertise to make GCF God’s reality.