Early in September a few of the Good News Today staff decided to attend the premier of War Room. We discovered quickly that the first showing was completely sold out as many folks were exiting the theater unhappy they couldn’t get in but simultaneously excited to learn that this Christian movie had sold out on its premier performance in Seekonk.

After a lengthy discussion with several other ticket holders we decided to attend the late show, even though it wouldn’t start until 9:30 that evening. When we arrived back at the theater, tickets in hand, there was already a line of folks forming at the door. We jumped in line and eagerly awaited entry. 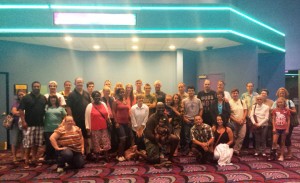 Grace Gospel Church attends the premiere of “War Room” at the Showcase Cinemas in Seekonk, MA.

Our group was made up of inquisitive journalists so we introduced ourselves and soon discovered we were in the midst of a group of people from Grace Gospel church in Swansea MA. We were directed to the group’s leader Ronald Wagogo and here is what he told us:

“We truly enjoyed the movie and left with the call to action, ‘LORD, RAISE UP AN ARMY OF PRAYER WARRIORS!’. Yes, it was a blessing to be a part of this movie premier for the Kendrick Brothers.

I asked him if this was a special event for their church and he told me, “This was a youth group event that was advertised both from the pulpit on Sunday and during mid-week service. We had several families show up to attend and some brought their neighbors. Quite a few members of the church attended. Our youth group “EPIC Youth” does several social outings a year. We’ve done bowling, roller skating, mini-golf, bbq’s at Colt State Park, Firewater prayer walks, and other smaller social events. The goal is to build community amongst our youth group as well as be a physical witness as we are out and about.

I asked Ronald if they often watched Christian movies together and he told me, “We have seen a few of them and actually have discussed some of the “big budget” movies like Noah and Moses.”

If you haven’t see War Room, we highly recommend that you do. Bring your church group and take some time to discuss what you saw from a moral and biblical perspective. It a great way to enjoy fellowship with your church while learning something new.