NASHVILLE, TN – Keith & Kristyn Getty announced their latest live album Sing! Live at the Getty Music Worship Conference capturing the unique atmosphere as more than 4,000 pastors, church leaders, and musicians from 16 countries gathered at the Getty Music Worship Conference, Sing! to learn, pray and sing their faith. The album which has today been released as a retail exclusive through LifeWay stores in the USA and is also available at GettyMusic.com features new songs, timeless classics and some very special guest collaborators.

The Sing! Movement was launched to mark the 500th anniversary of the Reformation and grew out of Keith & Kristyn Getty’s vision to propel churches towards a deeper, more dynamic view of artistry, theology and congregational singing. The new album, which is the first to be released since Keith was awarded an OBE by Her Majesty Queen Elizabeth, provides a unique opportunity to hear many of the highlight songs of the conference and to discover new hymns featured during the event.

Keith Getty OBE says, “This conference was one of the highlights of our career so far. The sense of unity and worship in the room was something we will remember for a very long time. We are delighted that it has been captured on this new album and now a whole new audience can have that experience for the first time.” 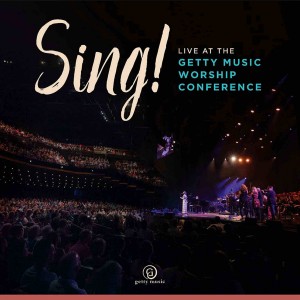 With a unique blend of hymns, old and new, that teach truths of God to carry for life, Sing! is a unique listening experience capturing the extraordinary energy of the conference. Featuring guest appearances from Joni Eareckson Tada, Grammy Award winner Laura Story, Buddy Greene and Jordan, Devon & Bob Kauflin, each track brings it’s own flavor of theological insight to a world looking for hope.

The Getty’s next Getty Music Worship Conference: Sing! will be hosted in Nashville, TN from September 10th – September 12th. The conference this year has nearly 6000 pastors and church leaders already registered, and it is anticipated there will be 7,500 attendees. Audiences will have the opportunity to hear celebrated speakers including the Alistair Begg, Tim Keller, John Piper, Sally Lloyd-Jones, David Platt, Trip Lee, Paul Trip, John MacArthur, the Gettys and over 50 other speakers and seminar leaders.

An estimated 100 million people are singing Getty hymns in church services each year, with their almost unique ability to be sung in contemporary and more traditional contexts of church music.

Last year, Keith and Kristyn’s first book, Sing! How Worship Transforms Your Life, Family, and Church, was published internationally by B&H (Lifeway) and has been critically acclaimed by readers and media alike with sales of almost 100,000 across the globe.

To register for the Getty Music Worship Conference: Sing! go to www.gettymusicworshipconference.com.