Greater: From Walk Over to Walk On

Football and faith deliver again in the once-in-a-lifetime story of Brandon Burlsworth (Christopher Severio), a star lineman at the University of Arkansas. But Burlsworth’s story was not always a success; without the mentoring of his older brother, Marty (Neal McDonough), who pushed Burlsworth to maximize his ability, the story would never have been legendary. In the end though, Burlsworth overcame mountains of obstacles to become a Razorbacks lineman for the ages in Greater. 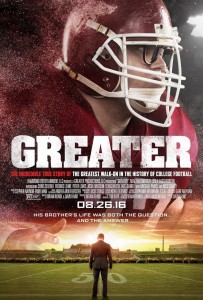 Too short. Too fat. Those were criticisms hurled at Burlsworth by everyone, short of his family and a handful of coaches who saw something more. Marty himself earns plenty of attention thanks to McDonough’s performance, and Marty’s role now as head of the Burlsworth Foundation. This is a story of legend thanks to the tragic death of Burlsworth after achieving his dreams in college, but it’s uplifting and powerful, too, in the hands of director David Hunt who also helped write the story.

In high school, Burlsworth plays for the likable Coach Tice (Peter Lewis), who teaches him values and lifelong standards. Fighting off the expectations of nearly everyone else, Burlsworth turns down a full scholarship to Arkansas State, citing that God wants him to play as a Razorback. It’s here that we see the faith side of the film begin to grow: Burlsworth believes God’s plan involves doing the impossible, but Marty’s reasonable expectations make him jaded and cynical toward both Burlsworth’s faith and football future.

At Arkansas, Burlsworth enters a world unprepared for his faithful, mild-mannered perspective on life. In football, he’s under the direction of line coach Coach Bender (Fredric Lehne), who himself serves under the watchful eye of Coach Ford (M.C. Rainey). [For college football fans, Burlsworth’s senior year is coached by Houston Nutt (Mark Dobries) and he was drafted by the Indianapolis Colts and their famed offensive line coach, Howard Mudd (Patrick Duff).] But in writer/director Hunt’s “based on a true story” drama, the gentle refrains of “I’ll Fly Away” ties each time and place together, playing subtly in the background with reminders of the faith aspect. While the film might seem to be completely about Burlsworth’s hardships on the football field, the equally important underlying story is about the kind of faith that Burlsworth shared with those around him – and the way that Marty struggles with the loss of his brother and faith in God.

In many ways, Burlsworth’s experiences off the field are the most painful to watch, as his attitude and beliefs draw criticism from others. But it’s plain to see from hearing from those who knew him and the way he’s portrayed, that his example caused others to seek faith and better themselves. In and out of season, Burlsworth worked on football, on his faith, on his life… and thanks to the way the script plays out, even on his brother after he’s passed away.

With a haunting take on legacy, Greater challenges us as The Farmer (Nick Searcy) shows up to emotionally examine Marty and his beliefs. Will he fall apart without his brother? Will he hold onto faith in the midst of tragedy? This is about legends, and faith, and the audience can rest assured that a Godly life will triumph in the end.

Now on home media, the DVD includes commentary from David Hunt, deleted scenes and bloopers, and the trailer.