Greeks Are Suddenly Worshiping Ancient Greek Gods All Over Again

(The Daily Caller) Perhaps if a sizeable, and dare I say fanatical, portion of the population adheres to its ancient roots they will have the strength to banish their ancient enemies, cleanse themselves of alien immigrant parasites and restore their people to the Upward Path. Only time will tell.

Greece has seen a resurgence of the once ancient religion of the Greek gods of mythology, with neo-pagan practitioners gathering at Mt. Olympus to worship.

Adherents of the ancient Greek religion, called Hellenism, gather at Mt. Olympus in July to worship the 12 gods of mythology said to have Olympus as their dwelling, Zeus chief among them, according to an AP report. The pilgrimage to Olympus began in 1996 as part of the re-hellenization movement spearheaded by the Supreme Council of Ethnic Hellenes, a founding member of the European Congress of Ethnic Religions. The movement aims to unseat the influence of the Orthodox Christian church and return Greece to ancient Greek philosophies, ideals, and pagan religion.

“At the core of the movement is the restoration of a lost cultural identity,” said Angelo Nasios in Patheos Pagan. “Reminding the Greek people what their authentic self is. For centuries, the Greek people have been subjugated to Orthodox Christianity, which has been against Hellenism from the beginning.” 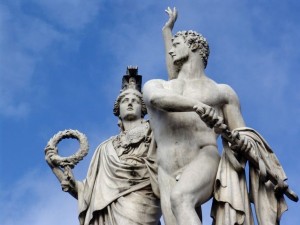 Officials of the Orthodox Church condemned the neo-pagan movement as “a handful of miserable resuscitators of a degenerate dead religion,” according to a BBC report. New worshippers of the ancient Greek gods have taken the two religions’ mutual rejection to a new level, leading a series of vandalizations of Orthodox churches in Greece. In one incident in 2016, vandals desecrated 13 icons in a church in Crete, scrawling slogans over them in charcoal such as “This one’s courtesy of Zeus,” according to a report from Ekathimerini.

One branch of the movement to revive Greece’s ancient pagan religion, led by an organization called Labrys, remains peaceful, preferring to focus on private and public religious ceremonies rather than confrontation with the Orthodox church.

The Greek government officially recognized Hellenism as a known religion on April 9. Hundreds have gathered for worship at Mt Olympus every year since 1996, according to the AP report. The number of followers across Greece was estimated at 100,000 in 2004, according to Panayiotis Marinis, one of the religion’s leaders. There is no official number of Hellenistic followers at this time, though 98 percent of the country remains Greek Orthodox.

Worshippers who gather at Mt. Olympus partake in rituals like the blessing of marriages and the adoption of ancient names to cleanse adherents of their Christian names and all influence of the Christian church. Though animal sacrifice was central to the ancient form of the Hellenic religion, modern worshippers make offerings of fruit, flowers, and milk, among other things.

The congregation consists of serious spiritual adherents of neo-paganism, liberal opponents of the Orthodox church, Greek nationalists who view the church as an invasive and destructive foreign influence, youth seeking counterculture, and fantasy gamers, among others.