At Planet Fitness, Yvette Cormier wanted to shape up — and instead, she got shipped out! The customer of a Michigan branch found out the hard way that if she wants to exercise her rights to privacy and free speech, she’ll have to find another gym. In a story that sums up the opposition to the Left’s infamous bathroom ordinances, Yvette came face to face with the consequences of giving gender identity a special place in local laws. Imagine her surprise, Yvette told gym management, when she walked into the women’s locker room and saw “a man” standing there.

“Freaked out,” she complained to the branch, who said the man identifies as a woman and had every right to use the facility of his choice. Stunned, Cormier contacted Planet Fitness’s corporate office — where she heard more of the same. According to the company’s PR director, “Planet Fitness is committed to creating a non-intimidating, welcoming environment for our members. Our gender identity non-discrimination policy states that members and guests may use all facilities based on their sincere self-reported gender identity.” 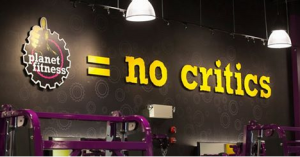 The gym, she was told, is a “no judgment zone” — but apparently not for everyone. When Yvette started warning women about the policy, Planet Fitness revoked her membership. “This is very scary,” she told reporters this week. “I feel like it’s kind of one-sided. I feel like I’m the one who is being punished.” Of course, the irony is that the same Planet Fitness company who said it was a man’s right to disrobe in a ladies’ locker room kicked a pregnant woman out of the club in South Carolina for showing her belly button! That violates the dress code — but a cross-dressing man doesn’t?

Sound bizarre? Unfortunately, this is the kind of topsy-turvy scenario that will be playing out in public restrooms, showers, and locker rooms across the country if more cities don’t turn back this push to elevate sexual orientation and gender identity above personal privacy and public safety. You don’t have to be a Christian or a conservative to understand the practical effects of these laws. “Tolerance” sounds like a great idea until your little girl is in the restroom with a grown man. By introducing gender politics into an environment like a gym, Planet Fitness is creating a culture ripe for abuse.

All Yvette asked for was privacy — a third set of stalls to accommodate everyone involved. The company accused her of being “inappropriate” and “disruptive” — words that more accurately describe the gym’s sexually-charged policy. Yvette found the presence of a man in the woman’s locker room disturbing. Under these ordinances, the law says America’s objections are disturbing.