Half A Century Of Eternal Treasures

“When he called me, his deep, gravelly voice reminded me of an older Tom Brokaw.” 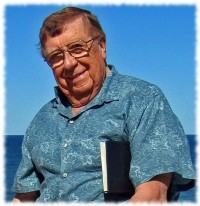 Articulate, soft-spoken, and yet remarkably vulnerable, Adam Miller, Songtime radio’s newly instated host, remembered his first encounter with Dr. John DeBrine with not a little affection. With a palpable tone of awe and respect he recounted the story of a man whose clarion voice broke upon sound waves of Christian, radio evangelism more than five decades earlier.

A self-proclaimed “reluctant president and host”, Adam Miller states with certainty that, in linking arms with Songtime’s mission, he is precisely where God would like him to be. Since becoming a board member in October of 2011, the dark-haired New York native has grown to savor the blessings of sitting beneath Dr. DeBrine’s teaching, strengthening a deep friendship over coffee at Dr. DeBrine’s house, and praising God for all the passions they share.

The youthful, ordained pastor and aging broadcaster connect over their desire to see the church of God playing an impactful role in the community. Most of all, the two men share a deep passion for evangelism, embracing Christ’s particular call upon both of them to be, “fishers of men.”  At every opportunity, Dr. John DeBrine declared the Gospel message. “And that,” Adam says, “was the first thing that captivated me.”

In the hustle and bustle of 1950’s Boston, Dr. John DeBrine began his ministry at Ruggles Street Baptist Church. His hair, now silvery grey, shone brown beneath the church lights as he animatedly spoke the Gospel to urban congregants thirsty for a word of truth. From the beginning, Adam Miller says, “John’s heartbeat was ministry.” His limitless faith in Christ poured out of his sermons and into the hearts of those sitting with uplifted eyes in the pews below. “John has a very type A personality,” Adam says, his voice brightening with the Kingdom victories validating his observation.

Inevitably, Dr. DeBrine’s energetic evangelism bubbled over the threshold of the Ruggle’s church. Dr. DeBrine’s passion for building a warm bridge of friendship between strangers and himself led to speaking opportunities in churches across New England. Yet, the zealous evangelist saw a marked emptiness in the churches’ outreach: Christian radio. Perhaps others saw it too. Perhaps fathers driving home from a long day at the office, disheartened, flipped through the stations on their car radios and found themselves confronted with a bleak choice between the Rolling Stones’ Let It Bleed and Jimi Hendrix’s Help! Maybe mothers, haggardly pressing towards the image of the Proverbs 31 woman, longed for something other than shows like Yours Truly, Johnny Dollar to calm her baby’s bedtime screams. Yet, for Christians, the radio landscape was bleak. Dr. DeBrine, however, sprang to action. “Even then, he was a trailblazer,” Adam Miller says. 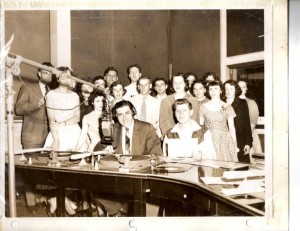 When Jesus remarked, “Faith comes by hearing, and hearing of the Word of God,”Dr. DeBrine took those words to heart. The Northeast, he knew, wrestled in a unique way with the progressive liberalism stoking the flames of the sixties’ penchant for “liberation”. Christians, caught in the uproar, needed the invigorating pulsation of audible truth to fill their ears and combat the chaos. Dr. John vowed to create a radio station which would beam Christian music into the cars and living rooms of Christians throughout New England and the Northeast.

And he wasn’t afraid to start small. “John started broadcasting out of a broom closet in the Ruggles Street church,” Adam laughed. Undaunted by the clutter of Windex, mops, and dusty brooms around him, John began to gather and broadcast a line-up of Christian songs. As Amazing Grace, Silent Night, and the hand-lifted strains of worship music sang into New England, Christian fathers finally smiled on their way home from work; mothers breathed in relief and soaked up the soothing notes. And always, punctuating the music, was the deep gravelly voice of John DeBrine hosting the program he came to call “Songtime USA.” In turn, his little band of listeners called him, “the first Christian DJ.”

As time passed, Dr. John chose a unique broadcasting format, alternating between music and teaching. He interviewed preachers, teachers, and staunch champions of the faith, bringing their wisdom and stories straight from padded microphones into the homes of his audience. He even broadcasted the stirring sounds of the Billy Graham Crusades.  In 1964, Dr. DeBrine concluded his active pastorate at Ruggles Street Baptist Church to devote himself full-time to his radio ministry.

“John always operated out of the mindset that, if others could spread the gospel more effectively than he could, he would give them the platform,” says Adam. “He was aware of his talents and abilities and used them passionately, but he never sought the limelight.”

Since Dr. DeBrine understood that the task of filling the air with Christ’s truth couldn’t be accomplished by one man alone, he continually outsourced, acquiring experienced and godly radio interviewees. He drew upon the wisdom of mission-minded luminaries such as seminary professor Steve Brown, singer Steve Green and author-theologian Ravi Zacharias as well as hosts of quiet yet mighty warriors across the country.

“He was always so sure of his goals and passions,” Adam says of Dr. DeBrine. Yet, in his supernatural dream to capture the radio world for Christ, Dr. John deeply understood that, in the words of John Lennon, he was “not the only one.”

He Found Friends On Street Corners

Decades passed. Dr. DeBrine’s ministry exploded beyond the broom closet. He set up Songtime USA’s official broadcasting station in Yarmouth Port on Cape Cod, MA. Never marrying, Dr. John’s love affair with Jesus Christ continued to deepen and expand. His warmth and affection for each and every human being overflowed, touching cashiers at Stop & Shop and pharmacists at the drugstore alike. “He always had drivers,” shares Adam Miller. “Most of them were young men he’d met at the grocery store.”

True to form, Dr. DeBrine found opportunities to spread the Gospel in creative, unexpected ways. He forged lasting friendships with the young men in the driver’s seat of his car, carried on faithful correspondence with friends he’d met years earlier, and often bonded with New Englander’s over his own passion for the Boston Red Sox. As a Chaplain for the Red Sox, he often had extra tickets, and eagerly shared them with strangers. “Let’s go to a game,” he’d say, and the platform of hard stadium seats to speak to his companions of Jesus’ love for them.

Dr. DeBrine exhibited unique openness, not only during a friendly conversation with the librarian behind the desk, but also with the listeners on the other side of his microphone. “He would give his personal phone number over the air,” says Adam. “He was, and is, so accessible.” Not only did he give his number between songs, interviews, and god-centered teachings, but he would answer.

Faith With A Strong Signal

For half a century, Dr. John used Songtime USA to reach the nation, from Vermont to Louisiana, from Maine to Pennsylvania. He set the groundwork for Songtime’s current mission, devoted to sharing, “His power to save man from sin; the new birth through the regeneration of the Holy Spirit; and the gift of Eternal Life by the Grace of God.”

When he fell and broke his hip, Dr. John Debrine’s broadcasting career came to a close. At the age of 80, the evangelist-patriarch retired, leaving the sound of his deep, comforting voice in the homes of thousands of Americans. In a video tribute, Dr. Ravi Zacharias said, “We cannot thank you enough. God bless you.”

At this point, Adam Miller, a zealous young pastor from upstate New York answered persistent phone calls from the retiring broadcaster. “At first, I was reluctant,” admits Adam. “But once I saw Dr. DeBrine’s vision and heart, I was captivated.” For the last two years, Adam Miller has served as President and Weekday Host of Songtime USA.

Bringing The World A Song 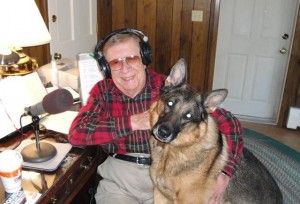 John and Barney at home

Now nearly completely homebound, Dr. DeBrine continues to meticulously maintain his appearance. “He always has a new shirt when he goes out. His pants are creased. He loves the color lavender,” Adam smiles. Dr. DeBrine’s latest German Shepherd, Leo, serves as a faithful companion to the wiry old man. Now confined mostly to his home, he continues to unearth opportunities to make friends. “He doesn’t know how to use the internet, but he asked someone to go on Craig’s List and post an ad for dog walkers.” He doesn’t need more than one, of course, but why miss out on the chance to meet more people, he says? Brilliantly, the elderly man with peppery hair draws the world to him, even when he cannot go out to the world.
“When I think of the word song in our company’s name,” Songtime’s young, new host remarks, “I am not thinking only of the musical concept, but of the message we Christians share.” When asked how Christians in New England can sing their song with clarity and power, he answered as Dr. DeBrine would, ”Their best ministry is the worship they give to Christ through their voice and life.”

As Dr. John DeBrine completes 50 years of ministry, he leaves a remarkable legacy of faith, one that trumpets so that others might hear, believe, and refresh their faith, one song and one interview at a time.

Songtime can be heard just about anywhere, whenever you find time to listen. In Rhode Island, Songtime airs on AM 1590 WARV and in Boston, AM 590 WEZE and 950 WROL. The program is also aired daily on the Cape at WRYP 90.1 FM/88.3 FM. For additional radio listings, information about Songtime and Dr. DeBrine or to listen online, please visit their website at www.songtime.com.

4 thoughts on “Half A Century Of Eternal Treasures”