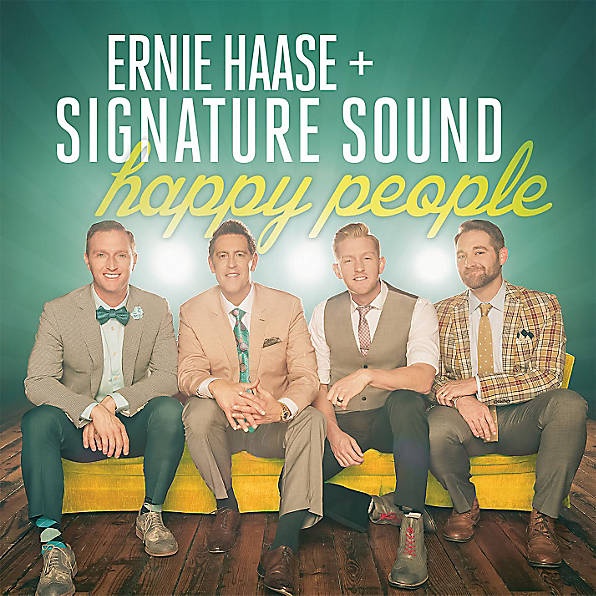 Having cut his teeth with legendary group The Cathedrals, Ernie Haase realized a dream in 2002 when he founded his own quartet. Ernie Haase & Signature Sound has since become a best-selling and award-winning Southern Gospel favorite.

Ernie’s recent label venture with musical director Wayne Haun has given him the vehicle to allow tenor Doug Anderson and lead singer Devin McGlamery to stretch their legs outside the group. And each has earned a Dove Award for his solo work (Doug, twice). But there is no denying the special sound–and bond–the quartet has together. Indeed, the current lineup (Haase, Anderson, McGlamery, and Paul Harkey) has really gelled.

Through the years Haase has dabbled in many sounds and genres–there’s even a Broadway release on the way! But with Happy People, EHSS largely sticks to what it does best. As he did years ago with “Get Away Jordan,” Haase again digs into The Statesmen Quartet vault to dust off a classic. This time, the treat is lively lead-off “One Of These Mornings.”

Casual listeners might fiind title track “Happy People” a touch schmaltzy; careful attention reveals a composition that doesn’t gloss over pain and heartache. Inspired by Psalm 144:15 “Yea, happy is that people whose God is the Lord!“, the lyrics explain “…happy are the people who always remember that happiness is the Lord.” I dare you to listen to this one and not break into a smile!

Though I would have liked to see him featured more on this project, McGlamery’s best moment comes on the sweeping “Thank You For Saving Me,” which could garner serious crossover radio play on Inspirational outlets.

Elsewhere, “Love Walked In” has a direct, country-flavored arrangement that suits both McGlamery and Anderson. Haase and Haun have a tendency to favor polished, often grand, production values. Though “Jesus Changed Everything” is lovely, I wonder if the song might not have been better served without the strings and horns.

Haase’s tenor still rings clear and true. On “Let Your Love Light Shine” his light tone is nicely balanced by Harkey’s rich bass, while “Angels Everywhere” is a gentle, strikingly beautiful example of how, musically, less can sometimes be more.

Of the remaining tunes, “It’s Good To See The Sun” would be more at home performed alongside Broadway numbers. As such, it will be a good concert interlude, but it feels out of place here when you consider how the album otherwise has a unified sound. In its place, I would have loved another energetic ensemble piece with an old-timey feel like “Joshua Led God’s Children.” On the sentimental “A Soldier Fighting To Go Home,” Harkey reveals how lyrical his voice can be. Finally, when EHSS presents their take on the Gaither Vocal Band song “I Do Believe,” Anderson shows his prowess as an interpreter before the arrangement swells into a big finish.

Closing Thoughts:
Happy People is a strong showcase for the vocal abilities of Ernie Haase & Signature Sound. The album more successfully presents a cohesive sound than have their recent recordings; this is a solid offering from one of the most entertaining and talented groups in Southern Gospel today.

Faith Christian Center in Seekonk, MA will be featuring Southern Gospel Great Ernie Haase & Signature Sound with Special Guest John Waller on May 14th at 7PM.  Marketing/Events Director, Chris Pfeffer told us, “We are excited to partner with The Ligthhouse Events and host the Happy People Tour with Ernie Haase and Signature Sound. They are an awesome Southern Gospel group. This is going to be a fun night for all ages.”

Tickets can be purchased here.