Have you been ‘Shocked by the Bible’? 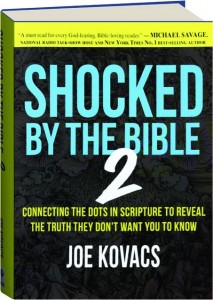 In an age when Christianity is openly under attack, one book that champions the Bible as absolute truth is surprising even longtime Christians with amazing facts many people simply don’t know are included in the pages of Holy Scripture.

“Your parents never told you this stuff was in the Bible,” says radio talker and author Melanie Morgan. WND founder Joseph Farah simply says, “‘Shocked by the Bible’ is nothing short of genius,” a view reflected in hundreds of appreciative Amazon reviews.

They’re talking about “Shocked by the Bible: The Most Astonishing Facts You’ve Never Been Told” by WND Executive News Editor Joe Kovacs.

“Shocked by the Bible” is a fresh, amazing look at what’s found in the pages of the greatest book of all time, as well as what’s not there. For instance, did you know:

• “Three Wise Men” appear nowhere in the Bible, and none are ever mentioned visiting baby Jesus in a Bethlehem manger

• The Bible doesn’t say Jesus died on a Friday, or rose from the grave Sunday morning. (Jesus Himself said He’d be in the grave for three days and three nights, not one day and two nights. Remember, Jesus’ followers found an empty tomb Sunday morning. He was already gone!)

• There were not just two of every kind of animal aboard Noah’s Ark, and the vessel is not said to have landed on “Mount Ararat.” It was the “mountains of Ararat.”

• Jesus made appearances on Earth in the Old Testament

• Jesus said no one has gone to heaven except Himself

“Yes, I’m a Bible-believing Christian and am among the biggest fans of the Bible of all time,” says Kovacs. “My goal is to educate people about the solid truth of Scripture and to stop the spread of erroneous information. I want people to crack open their Bibles and see with their own eyes what’s actually printed on the pages, and what’s not. It’s shocking!”

Kovacs holds nothing back as he quotes directly from the Holy Bible to address incredible issues. For instance:

• The word “Easter” has vanished from modern Bible translations. And you won’t find a single mention of Easter eggs, but you will find God warning His people not to have anything to do with a pagan fertility goddess, whose name is synonymous with “Easter”

• Animals had meaningful discussions with people

• The Bible calls the devil “god”

“Shocked by the Bible” will even make you laugh as it dares to look at the issues you’ll rarely, if ever, hear in church or on TV or radio shows:

• There’s a character in the Bible called a “dumb ass”

• Underwear didn’t disintegrate despite 40 years of heavy use

• The worst case of hemorrhoids in history is recorded

“It’s not about religion,” says Kovacs, “it’s about the Bible. What’s in it, and what’s not. You’ll truly be stunned when you see for yourself what Scripture has to say, without anyone telling you it doesn’t mean what it says.”

“Shocked by the Bible” answers questions regardless of anyone’s faith or personal outlook. It’s for those who have never read the Bible, those who don’t understand the Word, as well as those who have been reading it for years and know it well, or at least thought they knew it,” says Kovacs.

• “Since the professing church is unwilling to look intently at the Scriptures, embrace it all in context, [God] is using a believing investigative journalist to apply his gift and experience to be a witness to the Truth of what He said and established in His Word. Joe Kovacs is that man. … I recommend ‘Shocked by The Bible’ by Joe Kovacs because of his journalistic approach to the Bible. He is not trying to proselytize anyone to his particular brand of religion. His agenda appears to not go beyond just a journalistic look at Scripture in order to get straight facts into peoples’ hands that they might make an informed decision.” – Banner Kidd, Torah Perspective

The book soared to No. 1 in three Bible-related categories on Amazon.com even before its official release, with readers giving it the maximum five-star rating.

You can purchase a copy of Shocked by The Bible at any good book retailer or at Amazon.com.