“For with God nothing shall be impossible.” Luke 1:37

Russell White was born fifty years ago in the Belgian Congo to missionary parents who led their child to the Lord at an early age. While a teenager, during his church’s Missions Conference, Russ answered God’s call to follow Him wherever He led.

Meanwhile in Greenfield, MA, Beth Duprey, age 6, asked Christ into her heart. At age 12, during Vacation Bible School, she went forward in obedience to God, promising to go wherever He called her. 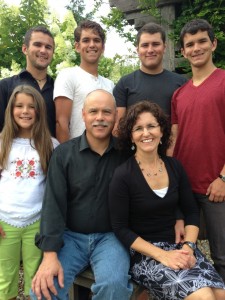 Russ and Beth White with Family

As teens, each from godly, mission-minded families, they met at a summer music school in PA. Still unsure whether to choose music or pre-med for his vocation, Russ was persuaded by his teacher to skip senior year and study piano at Philadelphia College of Bible (PCB). Later, deciding on pre-med, Russ transferred to Roberts Wesleyan College. Beth attended PCB her freshman year, switching majors from missions to education and, at Russ’ request, transferred to Roberts Wesleyan her sophomore year.  After his graduation, they married. Russ was 21; Beth was 20.  After moving to Ann Arbor, Russ began Med school at the U. of Michigan while Beth finished her degree in English Lit and Secondary Ed at Eastern MI University.

Russ soon became convinced that Africans were the most under-served population both for accessing health care and the Gospel, so he purposed to incorporate a strong component of teaching and discipleship into his future ministry. During a two-month elective rotation in the last year of Med school, the Whites explored missions by visiting a very rural hospital in Sierra Leone.  Encountering huge unmet needs, including extremely sick patients being treated by an overburdened doctor working virtually alone, Russ, still only a med student, did C-sections and assisted in significant cases. Beth helped in the hospital and taught high school English. Despite heat, humidity, and bats in their house, the experience kindled Beth’s desire to be part of helping, while Russ came away determined to train local doctors rather than put out fires.

After graduating with his M.D. in 1989, Russ chose a surgical residency to acquire the broadest experience. Accepted at Brown University for a 6-year program, he and Beth moved to RI where Beth taught at Barrington Christian Academy until Adam’s birth in 1991. In two years, when Russ became eligible for a surgical residency rotation, he opted for getting his Masters in Public Health (MPH) to provide more direction, and wrote mission hospitals inquiring whether they were willing to train nationals. Only Tenwek, a Christian hospital in Bomet, Kenya responded favorably. Founded in 1935 through World Gospel Mission with 3 American missionary nurses but no doctor until 1959, Tenwek now has 300 beds. They handle 130,000 outpatient visits annually, 5,000 patient admissions, perform 8,000 operations, and complete 1,500 endoscopic procedures, with 10,000 patients currently receiving treatment for HIV/AIDS.  Tenwek offers residency programs in General, Orthopaedic, and Family practice, and 2-year fellowships in endoscopy/research. Even more amazing, each year 4,000 patients come to know the Lord Jesus as Savior. 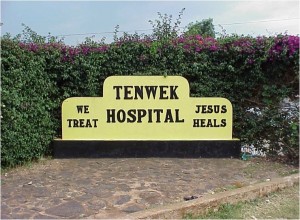 Before going to Tenwek, Russ took a 9-month course at Harvard U. of Public Health, earning his MPH in May 1992. In September, 1992 the Whites left for a 6-month surgical residency rotation at Tenwek. Though initially reluctant to take baby Adam to Kenya, Beth and Russ immediately experienced a strong sense that this was where God was calling them. Two weeks after their arrival, the Argentinian surgeon Russ had begun working with departed for vacation, thoroughly exhausted, leaving Russ in charge of surgery! The work was grueling, but Russ was drawn to it. Beth worked at the hospital, hosted visitors, and both got involved in a music ministry. Russ directed missionaries in a Christmas cantata, while Beth played piano.  They also joined other missionaries on a couple of safaris.

In 1993, heading back to Brown to finish Russ’s surgical residency, both knew they would return to Tenwek.  Andrew was born in 1994 and Russ finished residency in 1995 (receiving credit for his MPH and work at Tenwek). Since he’d witnessed much esophageal cancer at Tenwek, Russ looked for a 1-year fellowship in thoracic surgery, and was ready to depart for training at Frenchay Hospital in Bristol, England when Peter was born with severe narrowing of the aorta, requiring emergency surgery at 11 days old. God answered fervent prayers, and soon the family left for their English adventure. While there, Russ was excited when a generous doctor who had trained him and knew he was headed for Tenwek contacted him.  He proposed using some retirement gifts for an endowment allowing Russ to train Brown residents desiring to follow his course. Since then, Russ has trained many Brown residents at Tenwek.

Returning from England in 1997, the Whites began traveling to gather support from churches, friends, and family. After earlier applying to be missionaries under World Gospel Missions (WGM), now they found support from many churches including Barrington Baptist Church, which offered use of their missionary house during furloughs. In September 1997, the Whites returned to Tenwek to stay, now with three little boys, in an on-campus house provided by Tenwek.  Russ discovered that the eldest of the three other surgeons had just retired, the next most experienced left Tenwek the day they arrived, and the third was only available to operate half-time. Russ now carried the bulk of surgical responsibility except for the occasional helpful visitor. Faced with many cases well outside his realm of experience, he spent much “free” time in the library reading up about how to handle upcoming cases: neurosurgical, vascular, orthopedic, and urologic. He learned much in those early days through trial by fire. He also delivered James in 1999 and Anna in 2004; Beth home-schooled their five children at least through 8th grade, while functioning additionally as Russ’s support and a helper in Tenwek’s community of missionaries, hospital workers, and visitors.  Hosting Bible studies and events for trainees and missionary wives, she also participates in home-school coops, teaches reading to 3rd and 4th graders, interacts with residents and their families, and trouble-shoots when people with various needs show up at their door. Russ’s health has sometimes caused concern during several bouts with malaria, a serious infection in 2001, and a severe case of bacterial meningitis in 2007. Abundant prayer, excellent home care provided by fellow Tenwek caregivers, and Jesus’ healing touch eventually led to his recovery from each.

Russ, having personally witnessed God’s Hand on multiple occasions, has a treasure trove of stories involving how, when stepping out to do his best, God has come forward to meet him under amazing circumstances. Take what happened in 2000 when Chebet, an otherwise healthy Kenyan 3-year old, suddenly had trouble breathing while playing outside, and arrived at Tenwek barely conscious after a 3-hour ride. Russ suspected a foreign object had lodged in her windpipe, but had no functional bronchoscope available – just a 1950 version, an old metal pipe whose light didn’t even work — but he shined a flashlight down it and, though still unable to see, reached through with long forceps. Suddenly Chebet’s breathing and heart stopped, requiring that he remove the scope quickly, ventilate her, perform CPR, and restart her heart. After a second fruitless attempt, Chebet’s heart stopped again. Finally Russ tried a third time, but lacking the proper tools, that was also unsuccessful. The last option was to open her chest and cut into her windpipe, but that would take a long time and Russ doubted he could keep her alive that long. Everything he’d done had failed miserably, and all seemed hopeless. But, while scrubbing up alone, convinced she would die, he heard God speak, saying, “Go in there and try it again.” It seemed so clear that Russ felt obliged to answer, aloud. Profoundly moved, he replied boldly, “We’ve just done that 3 times and it’s failed.” Then he heard God say, “You’re right. You have failed, and you cannot save this girl. You’re not God, but I am. Let me work through you.” 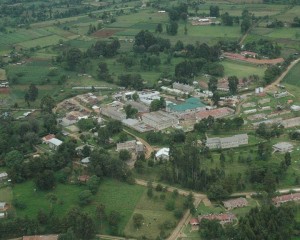 Returning to the O. R., Russ encountered approximately 12 colleagues preparing Chebet for surgery.  He announced, “We’re going back in with the scope.” His colleagues began arguing, but Russ explained he’d just spoken with Someone incredibly senior to all of them and they were going to do it. But…what was that??!  Russ suddenly spied on the counter a ureteral stone basket used for removing kidney stones. It was weeks since he, the only surgeon who ever used it, had seen it, but nevertheless it gave him an idea. Blindly pushing the scope back down Chebet’s windpipe while noting her heart rate dropping, Russ said “God help us”, inserted the ureteral stone basket through the scope, opened and closed the basket, and pulled it out. There, finally freed, was the culprit: a dried red kidney bean. Chebet’s heart rate promptly came up, everyone clapped, sang, and praised the Lord, Chebet awakened, and Russ left to tell her mother, “Jesus saved your daughter.” The mother wept. Russ asked, “Do you know Jesus?” She replied, “No”. Russ responded, “I think you should give your life to Jesus – He gave you back your daughter.” The mother immediately prayed to Jesus, and took Chebet home the next day.

Two months later a chaplain, asking if Russ knew Chebet’s mother was a local brewer, suggested visiting her. Upon arriving, a group of 35 women introducing themselves as the Women’s Bible Study Fellowship, explained that Chebet’s mother used to supply their husbands with drink, but after returning from Tenwek and asking them to help break down her stills, they began discipling the woman for whom they had prayed five years. 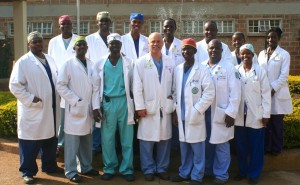 Last February, an 18-year old Kenyan arrived at Tenwek with end-stage rheumatic heart disease. Unable to walk more than 25 feet without stopping for breath, Hilary had dropped out of high school. Two of his four valves were destroyed, leaving his heart too weak to withstand treatment. Reluctantly Russ told his father, Hilary could not survive surgery; medicines would only help slightly. The father, a devout Christian, replied, “I trust Jesus for my son; I’m putting him in God’s hands – won’t you try to do your part?” Russ said, “I’m afraid I would kill him.” The father begged him to try, promising to trust Jesus for the outcome. After much prayer and counseling, Russ finally agreed, but repeated his warning. After putting Hillary on a heart/lung bypass, Russ stopped his heart and replaced the two valves but, when coming off the machine, Hilary’s heart went into ventricular fibrillation. Russ shocked the heart and administered drugs, but it happened again. Seeing no other option, but before letting Hilary go, he put him back on the bypass, stopped his heart for the third time, phoned an expert in the U. S. who agreed it was hopeless, and told the sad news to Hilary’s father. Hearing how Russ had done his best but to no avail, the father hugged him, comforted him, and thanked him for trying, yet said he still trusted Jesus. As Russ was about to remove Hilary from the bypass, a scrub nurse who is also a dedicated Christian pastor urged, “Let’s pray one more time”. He prayed simply: “Lord Jesus, I know you can heal Hilary, so please do it.” When Russ turned off the machine, Hilary’s heart started beating…strongly. The father acknowledged, “Jesus healed my son.” Now Hilary is back in school, playing soccer. God taught Russ: “Do your part; do what you can. It may not seem enough to you, logically or medically, but let Jesus do the miracle needed to save a life. Then stand back and watch what I will do.”

“And he said, The things which are impossible with men are possible with God.” Luke 18:27
To help  support urgent ongoing needs at Tenwek, contact the Whites, now on furlough, by