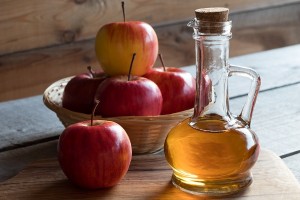 Apple Cider Vinegar (ACV) has been known as a health tonic since at least the 1950s. Scientific studies exist to back up many of the health claims made for ACV. There are other vinegars that can do a few of the health solutions ACV manages, but overall, apple cider vinegar with the “mother” is considered the most effective to support healing.

Raw apple cider vinegar, lemons, limes, and grapefruits should be a major part of preventing and recovering from colds and influenza, to make digestion easier, and raise pH values enough to make life for disease microbes, whether bacterial or viral, intolerable by increasing cellular respiration or oxygenation.

When it comes to using ACV to make potent anti-flu or cold tonics, there are a several combinations using raw honey and herbs that are available in many books and online.

What is the “Mother”?

The nutrients from fermenting organic apples leads to an abundance of digestive enzymes and probiotics.

Vinegar is a fermented food, like sauerkraut, kefir, kimchi and kombucha. The cloudy appearance and the cobweb strings in the raw vinegar mean the vinegar is living and full of nutrients. The “strings” in the vinegar are the “mother,” similar to the kefir grains used to ferment kefir. If there were no “mother” there would be no vinegar.

ACV with the mother serves to indicate the vinegar has not been filtered or pasteurized, either one or both processes reduce nutritional value and its medicinal qualities. When I use ACV I shake the bottle just prior to using it to include elements of the mother while pouring it into a solution, usually purified water.

Finding a source of ACV made from apples with no herbicides or pesticides is important, since apples are among the most chemically sprayed commercial plant crops. Even USDA organic certified apples can be sprayed in certain situations.

If you have a local source of clean apples, consider making your own ACV. Many Amish in the Midwest make their own ACV in large batches to add to water given to livestock, as an anti-bacterial and anti-parasite supplement.

Simply mixing a tablespoon or so of ACV in a glass of purified water on an empty stomach gives one a good dose of what’s needed to help fight or ward off whatever microbes seem to be going around causing fevers, coughing, weakness, and other flu symptoms that confine one to bed rest and increased liquid consumption.

Excess mucus can be thinned down for less congestion and easier elimination by drinking apple cider vinegar in water. Some swear by gargling with vinegar water at the outset of a cold or flu and not succumbing to a full illness. These simple natural remedies usually do need to be started at the first signs of a flu infection or cold.

As a daily routine of drinking a simple vinegar-water solution prior to meals to aid digestion, could be enough to ward off cold or influenza infections. At the same time, you would be adding sufficient acid to increase stomach acid requirements that begin the digestion process.

Many of us are deficient in stomach acid, especially as we grow older. Anti-acids are the wrong solution because the problems with so-called heartburn and other digestive issues come from insufficient stomach acid.

Maybe you noticed I mentioned ACV’s alkalizing properties and now stomach acid benefits are being touted. The explanation is simple. Acetic and malic acid goes into the stomach as an acidic element. They are soon metabolized to become alkaline in the blood. The same is true with citric acids. Lemons and limes are acidic in content, but they are alkaline producing foods.

This is known as the Krebs or citric cycle, a series of biochemical complex conversions named after German biochemist Hans Adolph Krebs. During the late 1930s, he discovered the metabolic cycle of citric acids that transform acidic content into higher alkaline levels and increased energy storage with high ATP (adenosine triphosphate) levels that are essential for intra-cellular energy.

One of the best ways to eliminate pathogens is to increase blood alkalinity to at least 7.0 or 7.4 pH. This is an average of several composite pH levels throughout the body. Sometimes different organs, such as the lungs and sinuses affected by influenza viral strains, need to go to even higher pH values for a short time.

There is the concept that the “inner terrain” of one’s body determines disease, thus enabling pathogenic bacteria and viruses to occupy tissue already in trouble with low or acidic pH levels. Disease pathogens flourish in low pH acid environments, but not in higher pH alkaline tissue environments.

Apple cider vinegar helps those with insulin resistance or type 2 diabetes keep their blood sugar down to prevent potential peripheral nerve damage that too often leads to amputations of toes and feet. This was supported by a study discussed in Diabetes Care a publication of the American Diabetes Association.

Calcium and other mineral absorption is increased by the acetic acid in ACV. Dairy is not the only source of calcium. Green leafy vegetables are also good sources of calcium. Sprinkling apple cider vinegar on salads increases the absorption of calcium from the greens used in a salad.