Healthy baby dies one day after being vaccinated: Mother asks why? 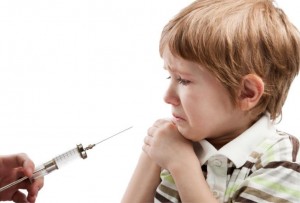 (NaturalHealth365) For a Nova Scotia family, the heartbreak over losing their vaccinated 18-month daughter has been so overwhelming, they have yet to connect her mysterious death to a well-baby check up she received only the day before. But it was at that check up that she and her twin sister both received vaccinations.

Nyla Kennedy survived.  But less than 24 hours after receiving the vaccine, her otherwise-healthy twin sister, Nevaeh Kennedy, was found dead by their mother the next morning, another victim of vaccine dangers and pharmaceutical industry greed.

Shortly after Nevaeh’s death, the family moved in with relatives, only to fall victim to a house fire.  It was that fire, so soon after losing their child, that was the focus of local news media coverage.

As the newscaster reported on the tragic loss of the toddler, the close proximity of her death to the administration of her vaccinations – which the reporter merely refers to as “shots” – is never mentioned. In fact, there is not even any mention of which vaccinations were given.

The mother tearfully tells the reporter that she needs closure, but has been told an autopsy could take up to six months.  Little does she realize that unnecessarily long, drawn out autopsy processes benefit a pharmaceutical industry hoping to diminish any association between the vaccinations and the child’s sudden death. She is unlikely to ever get real answers as to why her baby died.

Is this mother fully aware of the health dangers associated with vaccines?  Check out this video report and decide:

The number of vaccinations babies and young children are routinely subjected to has grown at a phenomenal rate during the past 40 years. In 1976, children received 10 vaccines before starting school. Today, they are subjected to over 36 injections.

While the National Childhood Vaccine Injury Act of 1986 legally requires pediatricians and other vaccination providers to report serious health consequences following the administration of vaccinations to federal officials, many fail to do so.  In fact, it is estimated that only from 1 to 10 percent of serious health problems related to the administration of vaccinations or prescription drugs are ever reported to the very federal health officials responsible for vaccination policies.

The evidence is clear: Vaccines are NOT safe

By the start of March 2016, there had been 972 claims filed with the federal Vaccine Injury Compensation Program (VICP). Those claims involved 57 deaths and 915 injuries occurring after administration of the measles, mumps and rubella (MMR) vaccination.

In one such case, the Department of Health and Human Services conceded that an otherwise healthy one-year-old toddler, Madyson Williams, died from a reaction to having been administered the MMR, varicella zoster and Hib vaccines simultaneously during a well-baby office visit. She developed seizures and died within six days. Her family was awarded the maximum allowable limit – $250,000 – for an acknowledged vaccine-related occurrence.

Meanwhile, the Centers for Disease Control and Prevention (CDC) and American Academy of Pediatrics continually reassure parents that vaccinations are safer than ever, even when given in combinations. Blanket statements on vaccination safety are accepted by parents as truth. Yet, there remains a noticeable lack of scientific evidence to back such statements up.

But when someone doesn’t blindly accept this reassurance, and instead raises concerns that vaccinations are causing death, autism, schizophrenia and neurodegenerative diseases, the conventional medical community insists not enough scientific evidence exists to support these theories. Study after study raising red flags about vaccination safety has been proclaimed inadequate by those who stand to profit from a robust vaccination schedule, no matter the human price.