HHS Bankrolled Catholic and Baptist Church from 2010 to 2013 to Prepare for Obama’s 2014 Invasion! 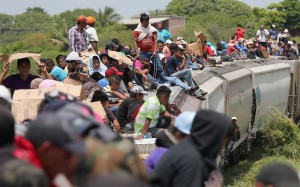 A month or two ago news broke that Obama’s HHS was calling for private contractors to help transport illegal aliens throughout the interior United States. What made this already big news even bigger is the fact that the original call for proposals came out in January, long before the bulk of the illegal alien surge began.

The breaking news is ten times bigger, because the following proves the Obama administration was bankrolling America’s churches back in 2010. And the tens of millions were flowing in to prepare for the invasion currently underway.

The following is a small taste of what’s out there in grant records. This is just the tip of the iceberg:

Between Dec 2010 and Nov 2013, the Catholic Charities Diocese of Galveston received $15,549,078 in federal grants from Health & Human Services for “Unaccompanied Alien Children Project” with a program description of “Refugee and Entry Assistance.”

Last year, the Catholic Charities Diocese of Fort Worth received $350,000 from Department of Homeland Security for “citizenship and education training” with a program description of “citizenship and immigration services.”

Between September 2010 and September 2013, the Catholic Charities of Dallas received $823,658 from the Department of Homeland Security for “Citizenship Education Training” for “refugee and entrant assistance.”

H/T Terri Harris Hill for the tip and initial research.