In first major abortion case since 2007, justices could determine future of state regulations

(WNS)–The U.S. Supreme Court agreed Nov. 13 to hear a challenge to Texas’ abortion center regulations, the first major abortion case since the court upheld a ban on partial-birth abortion in 2007. The court’s decision in this case could affect not just Texas, but a number of other states with similar regulations. Lawyers had expected the court to finally hear an abortion case this term, but that doesn’t diminish the significance of the decision.

Planned Parenthood greeted the news from the court with a fundraising letter titled, “The biggest threat to abortion rights in decades.”

“If we lose this case, its impact will be immediate and is likely to be far-reaching,” Planned Parenthood president Cecile Richards wrote.

But the case could equally threaten the pro-life cause at the state level. Justice Anthony Kennedy is yet again the likely deciding vote, and he voted to uphold the constitutionality of abortion in Planned Parenthood v. Casey in 1992. Casey struck down one state regulation but upheld others. Pro-life groups take consolation in Kennedy’s vote to uphold the partial-birth abortion ban in 2007.

“[W]e are hopeful that he will uphold the Texas law which is clearly intended to protect women from an under-regulated and predatory abortion industry,” Denise Burke, vice president of legal affairs for Americans United for Life said in an email.

The Texas law in question, enacted in 2013, requires abortion centers to have admitting privileges to a hospital within 30 miles, and to operate under the same regulations as a clinic doing outpatient surgeries. The 5th U.S. Circuit Court of Appeals upheld the law, but then this summer the Supreme Court blocked it until the justices decided the case. The law has resulted in 22 of the state’s 41 abortion centers closing. 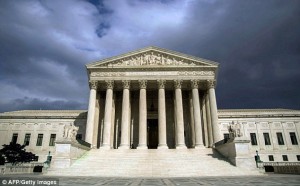 Opponents of the law say it places an “undue burden” on women seeking an abortion, a legal standard Kennedy helped establish in Casey. Pro-life groups like AUL, whose lawyers have worked on some of the state-level abortion regulations, said the case is an opportunity for the court to clarify its past rulings allowing for state regulation of abortion facilities.

Burke said the court that legalized abortion in Roe v. Wade did not give the abortion industry the “right to be free from appropriate regulation and oversight.”

“Instead, Roe specifically found that a state legislature’s legitimate interest in regulating abortion to protect maternal health ‘obviously extends at least to [regulating] the performing physician and his staff, to the facilities involved, to the availability of after-care, and to adequate provision for any complication or emergency that may arise,’” Burke noted.

The timing is significant for two reasons. The court will hear the case in the spring and issue a decision by the end of June, when the presidential race will be in full tilt. The case likely will bring into the race both the issue of abortion and the issue of the next president’s Supreme Court nominations.

Secondly, the court will be considering regulations of the abortion industry in the milieu of the Center for Medical Progress videos of Planned Parenthood officials discussing and showing grisly abortion practices. The videos led to a push to defund Planned Parenthood at the federal level and highlighted how abortion centers are often unregulated.

The court did not act on a similar case from Mississippi, and likely will hold that appeal until it issues a ruling in the Texas case which is Whole Women’s Health v. Cole.