High Priest is Chosen by Sanhedrin, Temple Service Could Be One Week Away

“For the priest’s lips should keep knowledge and they should seek the law at his mouth; for he is the messenger of Hashem of hosts.” Malachi 2:7

A significant step was recently taken towards reinstating the Temple service when the nascent Sanhedrin selected Rabbi Baruch Kahane as the next Kohen Gadol (high priest). The selection was made as a precaution for Yom Kippur. If the political conditions should change, allowing the Jews access to the Temple Mount, they will be required by Torah law to bring the sacrifices. Rabbi Kahane is confident that if that should happen, Temple service could begin in less than one week. 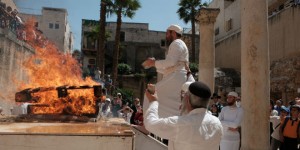 Rabbi Baruch Kahane, shown here offering the Omer (barley) sacrifice to God in the heart of the Old City of Jerusalem, has been appointed as High Priest by the nascent Sanhedrin. (Photo: Abba Richman)

Rabbi Kahane is a prominent scholar, knowledgeable in the complicated laws pertaining to the subject of the Temple Service. He is part of the Halacha Berurah Institute, established by Rabbi Avraham Isaac HaCohen Kook, the first Chief Rabbi of Israel, which deals with the elucidation of Jewish law from its Talmudic sources (Oral Law) and commentaries. He has played a prominent role in all the reenactments of the Temple services performed to date.

This year has already seen much Temple-oriented activity: the Temple Institute has created a registry of kohanim; established a school for educating men of the priestly class in the details of the Temple service; and performed reenactments on all the holidays, including the especially significant Passover sacrifice.

Rabbi Hillel Weiss, spokesman for the nascent Sanhedrin, explained to Breaking Israel News the necessity for choosing a High Priest, even in the absence of a Temple. 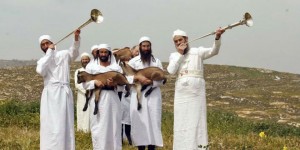 Kohanim carry lambs in a reenactment of a Temple Passover sacrifice. (The Temple Institute)

“We do not need a miraculous occurrence like the sudden appearance of a Temple descending from heaven onto the Temple Mount to make this decision relevant,” explained Rabbi Weiss. “The only obstacle preventing the Temple service today is the political issue. If that should suddenly change, as it very well could, we would be required to begin the Temple service immediately. It is therefore necessary that we have a candidate prepared to fill the role of the High Priest, especially now that we have kohanim prepared to serve in the Temple.”

Rabbi Yisrael Ariel, founder and and head of the Temple Institute, is a member of the Sanhedrin but did not rule in this decision. He told Breaking Israel News that it was necessary for the Sanhedrin to choose a Kohen Gadol.

“This is certainly something we should do now as religious Jews. Choosing a high priest and all of the preparations for the Temple Service  are mitzvot (commandments) that are incumbent upon us according to the Torah,” said Rabbi Ariel.

“It is not a matter of opinion. It is written explicitly in the Torah and, just like any of the other mitzvot written in the Torah, we have to choose a Kohen Gadol, and make all the preparations, regardless of whether there is a Temple standing right now.”

Rabbi Kahane was reluctant to discuss the Sanhedrin’s decision. “This may not be the time to choose a Kohen Gadol. There are no sacrifices required,” he said to Breaking Israel News. However, he added, “That could change overnight. In any case, it is clear that we need to be prepared, to prepare the priests, to have everything ready.” 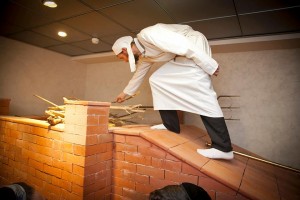 When asked how long it would take to begin sacrifices if it suddenly became permissible, he considered carefully before answering. “If the government decided to permit it, it would only take a few weeks to make preparations, even to do the Yom Kippur service,” he said.

“The structures can be temporary and prepared almost overnight. The biggest obstacle is educating the kohanim, which we are taking care of already. Once the priests are thoroughly educated, choosing a Kohen Gadol and teaching him what he needs to know for the Yom Kippur service is relatively simple and will take one week. The Temple Service performed by the Kohen Gadol is very demanding, but for an educated kohen, it is not overly difficult to learn to serve as the Kohen Gadol.”

Rabbi Weiss explained the importance of advancing Temple initiatives even when it seems that reinstituting the Temple service is not a matter of urgency.

“There are many Torah laws that are not sacrifices or Temple service but are nonetheless dependant on the Temple and the kohanim. We recently reenacted the Omer Wave offering, which has ramifications for when Israel can eat the current wheat harvest. In addition, we also reenacted the giving of the shoulder, two cheeks, and stomach of an ox to the priests.”

And this shall be the Kohanim’s due from the people, from them that offer a sacrifice, whether it be ox or sheep, that they shall give unto the Kohen the shoulder, and the two cheeks, and the maw. Deuteronomy 18:3

“This is not only part of a sacrifice, but is also an issue of kashrut (kosher laws), which we should be doing today,” explained Rabbi Weiss. “Instead, it is treated in a rather shabby, symbolic manner.”

While it seems unlikely that the political climate could shift within a few weeks to the extent necessary for Jews to establish an altar and begin preparing sacrifices on the Mount in time for Yom Kippur, the world can rest assured that as the moment those changes should occur, the Jewish people are prepared.