Hillsong NYC pastor has frank talk with Oprah about having a personal relationship with God, placing Jesus first

Her cultural and spiritual influence on America is immense. As the richest self-made woman in the U.S., her spiritual path veering into New Age influences has received sharp criticism from some Christians. But in a rather deep discussion with Hillsong’s pastor in NYC, nothing was held back as he boldly declared the need to put Jesus first. 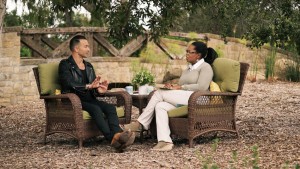 It seems a close friend of Oprah had talked up Hillsong’s 8,000-member community in the heart of Manhattan and extolled its rock star pastor who preaches in nightclubs and theaters throughout the city.

Lentz began by telling Oprah his core mission is soul transformation. “If you get your soul right, your behavior will change,” he noted. “This is not behavior modification. You can change your behavior and still have a rotten soul.”

Oprah said she was struck by the fact that his approach de-emphasized “religion” in favor of a relationship with God.

He told her he didn’t have the power to transform anyone. “People waste so much time doing it in their own strength and they can’t figure out why it’s not working,” he noted.

“If you allow God, if you will bow your knee…admit your need of God and if you do that… there is a moment where repentance matters,” he said. Lentz said it’s important to “hand over the keys” to God and let him drive your life, because “God can drive better than you can.”

While Lentz directed his remarks generally to viewers, his message also seemed pointed at Oprah herself. He said salvation begins with looking in the mirror and saying, “All right, I’m not going to make it, I can’t do enough, God I need you.” 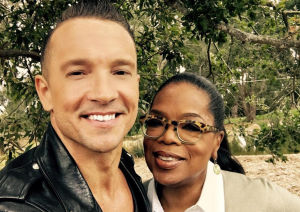 “In that moment I believe there’s a rescue, a salvation, that you can’t counterfeit any other way.”

Oprah asked if he believes only Christians can be in relationship with God.

“No, I believe that when Jesus said, ‘I am the Way the Truth and the Life,’ the way I read that is Jesus said he is the road marker, He is the map, so I think God loves people so much that whether they accept or reject him he is still gracious, He is still moving, He is still giving you massive red blinking lights for chances to take a right turn if maybe you’ve taken a left.”

Lentz said at the core of the Gospel message there is love. “If you take the love out of it you have a moral book. The love is what makes it different. That’s a message America is missing.”

He said if you resolve God’s revelation about Jesus the way you treat people will inevitably change.

Oprah recalled her own uncomfortable moments growing up in the church, when she felt embarrassed to attend because she saw herself as a sinner. She also described going through a hurtful church split and how it turned her off that people talked about love but couldn’t seem to reconcile with each other.

“Church sometimes is a barrier to God when it’s supposed to be a conduit,” Lentz admitted. “People tell me they tried church and it didn’t work for them. I always say I hope people didn’t get in the way of you having a relationship with the supernatural God.”

Oprah asked Lentz if he preaches from the Bible. “That’s all we got!” he exclaimed. “People ask if we are a hip, cool church. I tell them we’re preaching an ancient Word, the Gospel is timeless, it’s old, it doesn’t need a remix, it doesn’t need to have a publicist, or be made trendy.”

He said at 18 or 19 he got to a point when he couldn’t continue without Jesus. He was playing basketball at North Carolina University and came to the conclusion that his life was empty and that his actions had been hurting people around him.

“I got to a point where the grace of God opened up my eyes. You have to make a decision to accept or reject the truth you see. I still believe the number one question people have to answer is who is Jesus?”

“I was just going to ask that,” Oprah replied. “You read my mind. Who is Jesus?”

“He is God. He is everything. He is the answer,” Lentz replied. “He is the sacrifice, the atonement. He is the Way in. I know people who think Jesus was a good guy, a moralist. I don’t see Jesus like that. I see Jesus as salvation because I read things in the Bible that demanded a verdict.

“Jesus said I am the Way, the Truth, the Life and that’s why the Gospel confuses people. It is still the good news but it begins with bad news, which is, we’re all in trouble, we’re in a burning house.”

Oprah admitted people must choose a path of light or darkness. “Jesus came to say, ‘I’m going to show you the way, this is how you do it, right?” she asked. “You’ve said Jesus is your role model, but even the Old Testament? Come on…”

Lentz said the entire Scripture is “a love letter” if read in context. “If somebody says in Exodus it says this…I always say if you walked into a movie and you saw minute 22 of the movie and then you walked out and built a life on it, you would be an idiot.”

Oprah acknowledged the Bible reflects the time in which it was written. “Absolutely!” Lentz said. “The cross is right in the middle of it; the Old Testament shines a light on the need of who Jesus is. Jesus is active in the Old Testament.”

Oprah mentioned one of several stumbling blocks for her in the Scripture. “Segregationists used ‘slaves love your masters’ to justify slavery. If you only pick out a line…” Oprah said.

“We’ll be in trouble,” Lentz replied. “For Christians who like to camp in one passage, I always say be consistent in your hypocrisy.”

Lentz said he believes people have hijacked terms like energy, faith, and trust, and given them their own definitions. He said he could accept Oprah’s term, “divine energy.”

Oprah said she has experienced this “divine energy.” She said her favorite Bible verse is Acts 17:28: “for in Him we live and move and have our being.” Oprah said that in any instance where she feels anxiety, Maya Angelou taught her to use that verse as her mantra.

“I would say that all day and I would be in a peaceful space,” she affirmed.

Lentz told her his mantra is from Ephesians: “God is able to do more than you can hope or imagine or dream according to His power at work in you.”

Oprah asked Lentz about his friendship with Justin Bieber, which led to an unusual baptism with the pop star last year at 3 a.m. in the bathtub of NBA star Tyson Chandler.

“He knows Jesus and he has known Jesus,” Lentz said about Bieber. “His mom and dad did a great job to plant the right seeds.”

Since Chandler is over seven feet tall, his bathtub was customized to fit a man of his size and was large enough to baptize Bieber, who stands at 5’9”. Despite it being the middle of the night, Lentz described the whole scene as relatively normal. “Kim Chandler, Tyson’s wife, had some food out,” Lentz said. “This is like regular stuff for our type of church.”

“It was probably one of the most special things I’ve been a part of,” Lentz said.

Lentz went on to tell Oprah it’s important to recognize the difference between a contractual relationship with God and a covenant relationship. “Once you have repented of your sin, you have bowed your knee, you have surrendered to the reality of the Gospel, from here on this is not a contract; this is a covenant.

“A contract is a mutually agreed upon deal that somebody can break. People think they’re under contract with God. If you fail, God pulls out. But this is a covenant, which means he has given this as a sign for life. His end is not broken.”

“I think you have to get to the place where you realize the grace of God is for you,” Lentz continued. “That sin is real, the result of sin is real and if you don’t have someone breaking that cycle we’re all in this same boat. But because of Jesus you have the right to put your hand up and totally start a new cycle that to me is the essence of what we’re trying to do, which is to allow God to do what only God can do.

“It’s a commitment. It’s a decision. ‘I have decided to follow Jesus’ may be the best language to me.

“If God never did another thing in my life, Jesus rescuing my soul is enough. There is peace in that,” Lentz told the superstar.