‘Hold my beer and watch this!’ – Russiagate and the demise of western culture 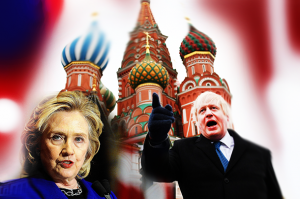 Rattlesnakes have a terrible reputation. Here were I live, in Florida, we have the biggest rattlesnakes on the planet, the Eastern Diamondback (Crotalus adamanteus).

They are huge and can reach well over 2m (6ft) in length and weigh up to 15kg (30lbs). The Eastern Diamondback’s venom is not the most potent out there, but they can deliver *a lot* of it. So, yes, it is a formidable creature. But it is also a gentle creature and truly very shy one.

Eastern Diamonbacks are also a stunningly beautiful creatures. I confess that I absolutely love them.

For all their reputation for nastiness, Eastern Diamonbacks will never ever attack you if they can avoid it. I have seen a lot of these snakes on my hikes, I have manipulated them (with a hook), and I have seen my German Shepherd come nose to nose with one (literally) and that Eastern Diamondback did not strike. Why? Because these snakes will do everything they can to avoid having to bite you.

First and foremost, they hide. Really well. You can stand right next to a large Eastern Diamondback and never notice it. You can walk right by, and it won’t move, or rattle its tail, and you will never know that it was there. Camouflage is their first line of defense.

Then, if discovered, they will rattle their tails. If needed, very loudly. You can easily hear the rattle from an Eastern Diamondback from 5m (15ft) away. More than enough distance to easily avoid it.

Furthermore, if given the chance, the Eastern Diamondback will retreat and hide.

Finally, when cornered a lot of them try what is called a “dry bite”: they do bite you, but deliver no venom. Why? Because you are not prey, so what would be the point of envenomating you?

The Eastern Diamondback does not want you dead, it wants you to let it live!

I was once told by a park ranger in Arizona that the profile of a typical rattlesnake bite victim is: white, male, with tattoos and the famous last words “hold my beer and watch this!“.

Why am I telling you all this?

Because that is exactly what I see happening before my horrified eyes.

Russia is the Eastern Diamondback desperately trying to do all it can to avoid to have to strike. The West is the drunk idiot full of hubris, arrogance and a very mistaken sense of invulnerability saying “hold my beer and watch this!“.

Keep in mind that in a confrontation with a drunken human the Eastern Diamondback is most unlikely to survive. And it knows that, and that is why it does everything it can to avoid such a confrontation in the first place. But if cornered or attacked the Diamondback will strike. Hard. Want to see what such a strike looks like? Like this:

You most definitely do NOT want to be on the receiving end of that strike!

But that’s for normal, sober, people. When you are drunk your attitude is “hold my beer and watch this!” you “know” that you can handle that snake.

They are all at it right now. May, Trump, Macron and Merkel, of course, but also the their sycophantic presstitutes and the herds of zombified followers. They all believe in their invulnerability and superiority.

The terrifying truth is that these folks have NO IDEA whom they are dealing with nor do they understand the consequences of pushing Russia too hard. Oh, in theory they do (yeah, yeah, Napoleon, Hitler, we know!). But in their guts, they feel safe, superior and just can’t conceive that they can die and their entire society simply disappear.

I suggest that they carefully ponder the following.

In a recent interview Putin was asked about the rationale of a retaliatory strike by Russia if she was attacked by the USA. Putin replied the following: “Yes, for mankind this would be a global catastrophe, for the world it would be a global catastrophe, but as a citizen of Russia and as the Head of the Russian state I ask: “what need would we have a world if there is no Russia?“.

So there you have it, directly from Putin: if the AngloZionist plan is to eliminate Russia (whether physically or otherwise), then the Russian people have no need for such a world. Consider these words as the Russian version of a very loud, almost desperate, rattle.

And look at how they are all trying to see how far they can “safely” push Russia.

I wonder if that Russian “rattle” will be loud enough to stop the West before it is too late.

I am not so sure.