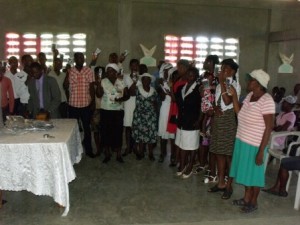 On August 27, Sam Simpson, President of Global Outreach Missions and Board member of Homebound Missions set off for Cahess, Haiti in collaboration with In Touch Ministries to distribute 400 Messengers.

The Messenger is a small device that (in this case) contained an audio Bible in English, French, Creole and Spanish. As many cannot read or write in Haiti this was an extreme opportunity to get the word of God into the hands of an entire community. What made these devices especially fitted for the area of Cahess is that it had both French and Spanish, as many people in Cahess speak Spanish. 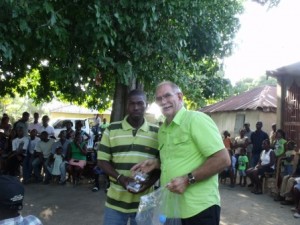 Sam says, the real blessing for him came when on Sunday afternoon he had an opportunity to rest at the home of Pastor Coty and Dr Ally’s parents’ and while he watched he could see people walking down the street listening to their new devices. He also noted that on Monday when he was returning home, he observed people working at the airport who were listening to the Bible on their devices.

Praise God from whom all blessings come!

We would also like to say a special thank you to In Touch Ministries who provided these devices free of charge. We are so thankful for their outpouring of generosity. They provided a wonderful life giving gift to the community of Cahess, Haiti.

To learn more about Homebound Missions, located in Whitinsville, MA, and the work they are doing in Haiti, go to homeboundmissions.org