Homeless instead of penniless in the Golden State 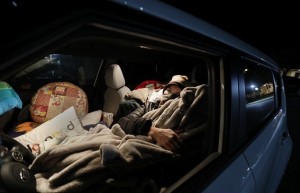 (WNS)–Living on the streets has a new meaning in California. In a state whose cities ranked among the highest in the nation for “unsheltered” homelessness in 2017, more and more people choose to live in their cars.

Surprisingly, many of the newly homeless car-dwellers have jobs. Their homelessness is an independent solution or planned choice. One such car resident in Atlanta, writing as “nihilistscientist” on Reddit, claimed friends offered their couches and floors, but he responded, “Nah, I wanna do this. It’s intentional, not out of desperation.”

Online forums offer advice on how to take up urban living without a home. People discuss not only the best parking lots in which to stay overnight but also share tips on how to eat using rice cookers or convert a Ford Escape into a bedroom.

High housing costs are a major factor driving the “wheel-estate” boom, wrote Chris Reed, an opinion editor for The San Diego Union-Tribune. He predicted California would again set a national trend as people opted to live in 80 to 150 square feet of their cars and vans rather than shelling out up to $3,500 a month for a small apartment—plus bills and insurance.

With ample spacious parking lots that can be monetized for use at night, Reed anticipated “redefinition of the car in California” as shelter rather than a symbol of adventure or independence.

Beyond California, the national economic boom could trigger more instances of self-exile from traditional dwellings. Older or lower- to middle-income people, especially when their jobs are mobile or seasonal, rebel against paying half their earnings or more for housing. Though the popularity of so-called “tiny houses” offers minimalist or cost-effective housing for the employed, vehicle dwelling avoids the maze of municipal regulations placed on these small structures. And tiny houses can’t double as a means of getting to work.

As part of a comprehensive homeless strategy in 2017, Los Angeles codified new rules for car life on city streets in residential and nonresidential zones. The codes make life on the streets a challenge but not a crime. As long as a vehicle is tagged, drivable, and moved within 72 hours, a person may live nearly anywhere that’s at least 500 feet (one block) from certain facilities like schools, parks, or day cares. Other restrictions are noted in online maps.

San Diego takes a different view of the new trend. It operates two parking lots for year-round car dwellers to set up for the night. But the city requires each person to be “willing to and agree to moving from their vehicle to more stable housing—permanent or transitional.”