(WNS)–TLC’s new large-family reality show, The Willis Family, seemed redundant when first announced. After all, next to their famous forerunners, the Duggars of 19 Kids And Counting, the Willis family can hardly even be called large—their dozen children a pittance in comparison.

Now that the Duggar troubles have suddenly eliminated any direct competition between the families, the question remains: What do the Willises do that the Duggars didn’t do first? Music. 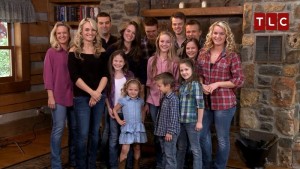 The Willis kids hum and strum anything and want to be a professional touring band in the vein of a modern day Partridge family. The whole thing might be hopelessly—even painfully—anachronistic. But they’ve got real talent.

The family’s skill and novelty attracted attention on America’s Got Talent, where they performed a rocking bluegrass version of My Favorite Things. Eldest daughter Jessica has the voice of a country dream, with a bit of swagger. Her sisters play a nimble mandolin and Irish whistle, while the brothers nail it down solidly on bass, guitar, and drums. The harmonies are clean and zesty in the old bluegrass style but nicely retrofitted for rock, as well. Music and family come together poignantly at the end of the first episode with a performance of Jessica’s new song, titled “Momma,” written to honor her mother’s dedication and sacrifice.

On the show, they appear at diverse venues from the Grand Ol’ Opry to the local library. Twenty-one-year-old Jennifer insisted they love playing regardless of the size of the crowd: “On Youtube, we have 5 million views. … I don’t see that performance as any different than playing at the library for 50 people. God has given us a gift and we want to share that with people.”

The show is also distinguished by a powerful backstory. Father Toby Willis is the son of Rev. Scott and Janet Willis, who lost six of their children in an infamous 1994 car accident in Illinois. A commercial vehicle dropped debris that smashed into the Willis van. Later investigation revealed the driver illegally obtained his license by bribing an employee of then-Secretary of State George Ryan’s office. Ryan went on to become governor of Illinois but was convicted in 2006 of racketeering and fraud related to the scandal, according to the Chicago Tribune. Ryan eventually served five years in prison.

Toby Willis wasn’t in the van that day and so survived. But the incident left a deep mark on him and his children. Toby’s commitment to his family is one result, according to his children.

“It’s a lesson that stays with you,” said Jessica, crying as she recounted details of the tragedy. “That not just things, but people can be gone like that,” she observed as she snapped her fingers.

Offsetting that drama are the usual minor escapades. The Willis’ 5-year-old son plays Zorro and draws little “Z” marks on the walls of their rented home. He amusingly tries to evade responsibility while the parents demonstrate helpful wisdom in navigating childish mischief. Twenty-two-year-old Jeremiah’s foible-filled trip to the grocery store is less interesting, though he demonstrates kindness to the little sisters who accompany him.

The Willis kids are all homeschooled and seem articulate, technologically savvy, healthy, and well-rounded. They wrestle, dance, and draw—winning national and state titles—and they constantly joke around with each other. This points to the show’s ultimate justification—to show a family that cares for one another, whose traditional values and faith don’t get in the way of a thriving sense of fun.