Have you heard of the Canary in the coal mine? You know it is that allusion to caged canaries that miners would carry down into the mineshafts with them. If dangerous gases such as methane or carbon monoxide leaked into that shaft, the gases would kill the canary before killing the miners. The death of the canary provided a warning to exit the tunnels immediately.

Is there a canary in the coalmine for a country or for a society? I believe there is, and it is the health of the family in that culture. One can look at the health of existing families. Although that is very important it is not the most significant measure.

The best canary would be the predictor of the future health of families in that society. While it may seem daunting to measure that aspect, one element of it is perfectly clear. When we see a specific statistical pattern of falling family formation that serves as a canary. Indeed,

Data from the U.S. Census Bureau suggest that more young couples are delaying marriage or foregoing matrimony altogether, possibly as an adaptive response to the economic downturn. Between 2000 and 2011, the share of young adults ages 25 to 34 who are married dropped 9 percentage points, from 55 percent to 46 percent, according to data from the Current Population Survey.… During the same period, the percentage who have never been married increased sharply, from 35 percent to 46 percent, so that the proportion of young adults who have never been married is now roughly equal to the proportion who are married. Marriage has declined for several decades, but accelerated with the onset of the recession. Since 2007, the proportion of young adults who are married has declined in every state except for Alaska, Montana, and Wyoming. 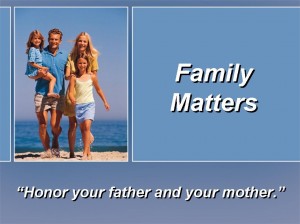 To those statistics, which are now three years old, we can add the successful attacks being made on the foundation of the healthy family – marriage. We know that sodomites have no desire to “marry” in large numbers. Some of their leaders have admitted that what it is all about is destruction of marriage as an institution in our land and thereby the undoing of the family.

We have seen the research by Stanley Kurtz in his article The End of Marriage in Scandinavia regarding what is ahead for us with the sodomite unmarriage agenda. I would sum it up this way. As young people see sodomite unmarriage adopted by civil government, they realize that what legally passes as marriage is nothing but a joke, a sham and a fraud. Thus they choose not to participate in that fraud. What is the solution to this dilemma?

The Psalmist asks, “If the foundations be destroyed what can the righteous do”? He recognizes some counsel flee as a bird to the mountains. But the Psalmist knows better. It is not time to flee; it is time to rebuild the foundations.

As has been repeatedly illustrated throughout the history of the work of Christ in this world, when the culture collapse around them, true disciples of Jesus Christ shine more brightly because their life and their witness offer the answers that paganism never can. If pagans choose to shun marriage, if the civil government destroys the institution, if chaos reigns supreme, then the light of Christian marriage, the hope of vibrant Christians families will be a beacon for those lost in the hopeless sea of fake marriage and endless ruin of broken families.

Where do we start to rebuild that foundation? Turn to Exodus 20. In verse 12 we read, “Honour thy father and thy mother: that thy days may be long upon the land which the Lord thy God giveth thee.” I would propose that the Fifth Commandment is the building block upon which a reformation of marriage and family are built. This commandment is monumental; it turns the whole issue in a direction that one might not have expected.

We ought to think carefully about obedience to this command. Honoring the living is done differently than honoring our parents who have gone before us into eternity. For those who have passed we can honor with our words, what we say about them to others. For the living we can do so much more. This week, what would your father in heaven have you do to honor your parents, those on earth as well as those in eternity?