Hope for the Homeless

Recently I took my wife to pick up some medication for her elderly aunt. I won’t give the name of the pharmacy or the area, but I would tell you it was a depressed neighborhood to say the least. As I stood waiting by the counter and shielding my Janie from the view, I took stock of the “environment” both inside and outside, and for the first time in my life I was left with a feeling of utter and complete hopelessness. This is wholly uncharacteristic for me, but I just couldn’t shake it. How much worse could things be for the people who I saw that day? How much worse could a neighborhood get? And what if anything at all, could anyone do to help. Dear God, where would they begin?

Being a political animal, I’m fond of presenting my solutions to the problems of poverty and homelessness whenever an audience is willing to lend an ear. But I realized something that day. For all of my so-called experience, and all the things I’ve seen and done, the magnitude of these problems is far greater than most will ever know, including me. Moreover, it’s dynamic and multifaceted on so many levels, that the notion any one politician or pandering social mouth-piece could wave a magic wand and make everything better, is even more ridiculous than it sounds.

So then what is the answer? What measure of effort or grand endeavor would be needed to overcome generations of ideological foolishness and Godlessness? Notwithstanding my views on why things “are as they are”, there are truly people in need regardless of any societal cause and effect. They are in need of food, shelter, medicine and toiletries. They are in need of blankets, diapers and cloths. They are in need of both mental and physical medical care, as well as economical and employment guidance. In some cases though, they are simply in need of a caring soul to explain God’s grace, and to tell them that he has not and will never abandon them. All these things many of us have and sometimes take for granted, do we not?

“Do not be afraid or discouraged, for the Lord will personally go ahead of you. He will be with you, he will neither fail you nor abandon you.” Deuteronomy 31:8 NLT

Well we can certainly agree on the problems, and even maybe some of the political solutions. But all of that bunk means little to the young mom whose “significant other” is significantly absent from her life, leaving her scared and alone on the street with nowhere to turn. It means little to the Vietnam vet tortured by the memories of a violent period in his life and searching refuge. And it means little to the teenager racked by addiction early in life and without the positive and caring reinforcement so necessary to help weather so powerful a storm. So who is so great and omnipresent when these challenges arise? Who is there without change or wavering in the face of all life’s adversity, and dwells in the hearts and minds of those whose faith is strong and determined? Christ Jesus, that’s Who… 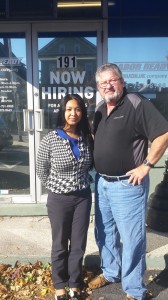 Some time back I profiled a small group of folks from the Rhode Island Dream Center. Fearless and determined to make a difference, these messengers for Christ made an impression on me that has not been diminished. So I jumped at yet another opportunity to bring positive God energy to a fight that is weighing heavy on my mind these days. 60 year old Artie Russo, President of the Rhode Island Dream Center, didn’t necessarily find God in a church pew or a book, but rather he tells me, he found Him in the hearts and souls of his volunteers and those they touch. Artie and I spoke last week and he told me that some 10 years back he simply needed more, and that at no other time in his life has he felt so fulfilled by his life’s work as he does today. It doesn’t hurt that Artie is employed in the labor field, helping people transition to employment every day. He told me that his blue collar experience and interactions with those affected by the recession have helped him understand the “business” of people in need.

Worshiping  out of Praise Tabernacle Church in Cranston RI, Artie and his ever growing band of volunteers have brought real faith based “hope and change” to so many of the homeless and downtrodden. Not by way of just words, prayers or politics, but rather actions and efforts. During our talk, Artie reminded me of the six programs his team brings to the needy on a regular basis, and how that need is always pressing on his heart.

It all began with the “Food Truck”. That truck that I highlighted in the last article goes out nightly to homeless shelters and facilities like “Crossroads” and Kennedy Plaza to deliver meals to those in need.  The truck feeds an average of 300-450 weekly, thanks to the heart-felt donations of businesses like Superior Bakery, Blount Foods and Shaw’s Supermarket. You can see a list of all their special donors on the Dream Center Web-site at http://ridreamcenter.com 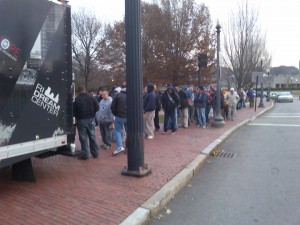 People standing in line in front of the State House to receive their “Winter Survival Back Pack” in 2013. Hope for the Homeless gave away 350 last year and will hit 500 this year, their 8th year in a row!

“Hope for the Homeless” is at the center of the RI Dream Center’s efforts today.  “This program is an awareness and fundraising campaign dedicated to helping the homeless in Rhode Island, and which sponsors major awareness/fundraising events throughout the year, including the Annual Motorcycle Run in July and the Hope for Homeless Awareness Week in November. (This event in particular typically coincides with the “National Hunger and Homeless Awareness Week”.) Following Homeless Awareness Week, a back pack give-away takes place, where back packs are filled with winter necessities and toiletries and given away to the homeless. Volunteer vendors from around New England like CARENET and Teen Challenge, as well as veteran’s organizations and public offices, donate time and effort to the cause of giving folks not only a hand-out, but an even more important hand-up.

The “Early Seekers” group gets an early start every Saturday morning, (on site at Crossroads Shelter at 06:30). Volunteers distribute bagged lunches and clothes to an average of 250-300 people weekly. When the Lord intervenes, volunteers will also take prayer requests and witness to those who might be seeking a higher power of intervention. Volunteers compile a list of any needs from the people they interact with, and then reach out for donations to meet those needs during the week. Many of those needs include things like clothes, shoes, furniture, etc. 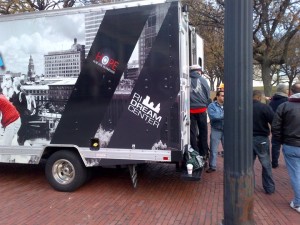 The Rhode Island Dream Center Food Truck hands out Hot Meals Sunday through Friday Nights at select Providence and West Warwick Locations and on Saturday Morning at Kennedy Plaza at 6:30 AM.

“Overcomers” is a thirteen step program focusing on breaking the cycle of addiction which may not only be destroying a person’s life, but may also simply be holding that person back from realizing their God-given  potential. This program encompasses love, honesty, confidentiality and self-realization, dealing with nearly every major addiction, and even includes things like cigarette smoking. More often than not, the battle over addiction begins with a ready shoulder to cry on and/or just an ear to listen.

“I Need You To Live” is a program where homeless women are bused back to Rhode Island Dream Center from the city around every nine weeks or so. They are then pampered with head to toe makeovers, including haircuts, styling, hair dyes, manicures, pedicures, facials and a warm meal. Sometimes the injury suffered in need is not physical or even mental, but more emotional. Homelessness brings shame and issues of worth and self-esteem to the forefront of a person’s psyche.  How a person sees themselves in a mirror plays a critical role in any rebound/recovery, and the Dream Center’s efforts to help these women realize their beauty inside and out, is nothing short of a miracle. Both volunteer and beneficiary enjoy the time they spend together, while the professional volunteers are forever moved by the experience of changing a life by way of a talent they may often take for granted as just a means to pay the bills.

And finally, “The Covenant”, speaks to normalcy in the lives of people who are struggling. The effect of being able to embrace God’s overall plan for us, in terms of marriage and a family unit, and even in the midst of great trial, cannot be measured. This program provides a wedding and small reception at no cost to any homeless/low income couple looking to be married in the eyes of God.

As I listened to Artie rattle off the amazing and growing platform of the Rhode Island Dream Center, and as I perused the organizations website, it all started to clear up for me. It’s easy to lose hope sometimes. The world seems poised as it hasn’t been in some time, to go off balance with great tribulation yet to come. Closer to home, we only need look to our neighborhoods and inner cities to witness what’s wrong. But while this can be overwhelming to say the least, with political pandering being all that we here from our inept and self-serving congressman and senators, it occurred to me that Artie was the solution.

Now I don’t mean that Artie Russo the man will intervene and make all things right in the world and I’m pretty sure that’s not necessarily his goal. What I mean is that Artie, and those like him, seem almost blind to the overall chaos, but rather are laser focused and content to start at the beginning, recognize a need, pray and begin the process of intervention. And if that means starting by feeding just one person a bagged lunch, who otherwise would have went hungry that day, then that’s your mission. That’s Arties approach, and we can see by way of how far he’s brought the RI Dream Center, how God’s working through him and his volunteers every day. In fact my friends, there is no magic wand, no politician with another bureaucracy or public policy in hand that will save the day. No! It’s Artie and motivated people of Christ who’ll step forward and begin the difficult jobs and take on the challenges that seem so impossible to others.

So after speaking with Artie Russo, and not unlike other times when I speak with men and women of action not words, I’m hopeful again. Maybe if we all take a page from the Rhode Island Dream Center’s book, and with God’s help, we might just begin to turn this ship around…

Artie did tell me that the volunteers and funds always seem to show up when needed. God is truly good. Nevertheless the need is great and your help in the form of time, money as well as goods and services are sorely needed, and will help the RI Dream Center to help those in need this holiday season.

The most pressing needs are for the upcoming Hope for the Homeless Awareness Event & the Back Pack Give Away, both coming up in November on the 8th & 15th respectively. Back packs are filled with winter necessities like socks, hats, gloves, scarves, toiletries, etc. and will be distributed to the homeless at the state house. Artie tells me, “We hand out about 350 each year and this year, with God’s blessings and more donations, we will hit 500!”

Incidentally Artie tells me The RI Dream Center will be officially recognized by the national sanctioning body in Arizona by the end of the year.