(WNS)–The House passed a resolution 230-188 on Feb. 16 to reverse a last-minute Obama administration order to protect some of Planned Parenthood’s funding.

Days before leaving office, President Barack Obama issued a directive barring conservative states from blocking Planned Parenthood and other abortion providers from Title X funding. The resolution seeks to give states the option to direct Title X grant money to any kind of health center they wish.

Direct taxpayer funding of abortion is still a violation of federal law, but some states sought to withhold Title X family planning funds, as well, from centers that provided abortions. Each year Planned Parenthood receives around $500 million federal dollars. About 25 percent of those funds come from the Title X program. 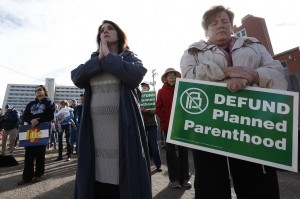 Participants in an anti-abortion rally hold signs and pray as they listen to a member of Christian clergy read from the Bible, in front of Planned Parenthood of the Rocky Mountains, in Denver, Saturday, Feb. 11, 2017. Anti-abortion activists emboldened by the new administration of President Donald Trump staged rallies around the country Saturday calling for the federal government to cut off payments to Planned Parenthood. (AP Photo/Brennan Linsley)

More than a dozen conservative states favored giving Title X funding to alternative health clinics over abortion providers. Pro-life lawmakers claim the congressional resolution is not about defunding Planned Parenthood per se, but rather endowing states with the right to fund the kind of care they desire.

“We are simply voting today to affirm the rights of states to fund healthcare providers that best suit their needs without fear of reprisal from their own federal government,” said Rep. Diane Black, R-Tenn., the lead sponsor of the resolution.

Under the Obama rule, states which chose to redirect funds away from Planned Parenthood risked losing their Title X grant money altogether.

Black’s resolution fell under the Congressional Review Act, which grants Congress the ability to disapprove a new federal agency rule within 60 days of its passage. The resolution will now go to the Senate and can pass with 51 votes. Republicans hold a 52-48 majority in the upper chamber.

“Obama’s legacy of forcing Americans to finance the abortion industry is being steadily dismantled by our new pro-life president and the pro-life Congress,” Susan B. Anthony List President Marjorie Dannenfelser said. “We look forward to swift passage of this resolution in the Senate so that it can receive President Trump’s signature.”