Houston You Have a Problem, a Big Problem! 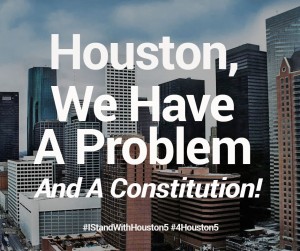 The mayor of Houston is a lesbian “married” (in California) to another female so that is a big problem; however, now her honor wants local pastors to submit their sermons to the city to ascertain whether or not they took a position on the city ordinance permitting transgenders to use any restroom of their choice! What unmitigated gall. What incredible stupidity. What an insane, illegal, and impudent demand. If I were a Houston pastor I would make it very clear about my reaction. I will assume to be the pastor of a Baptist Church in Houston.

I would tell the mayor that I will not obey her subpoena and submit my sermons to her or anyone! Period. That means “never” even if ordered to comply by the U.S. Supreme Court, the Department of Justice or even the President of the United States! Those entities are part of the problem! President Obama signed the U.N. Declaration on Sexual Orientation and Gender Identity and even hosted in the White House (that’s our house) the first meeting with transgender activists! Furthermore, the Equal Employment Opportunity Commission ruled last year that “gender identity or expression” in the workplace is protected under federal civil rights law!

The lunatics, leftists, and losers have taken over the asylum. Note that I have not used the mayor’s name since I don’t want to honor her in doing so. It was not accidental.

I do have good news for the mayor. She can hear my sermons Sunday morning, Sunday evening and Wednesday evening. In fact, she can bring her girlfriend also. Moreover, they will be invited, along with thieves, muggers, liars, and fornicators, to “hit the sawdust trail” and repent at the altar for the vile sin of homosexuality. I will even personalize my sermons and preach the clear Bible teaching that all sex outside of marriage is wrong and same sex “marriage” is vile, vulgar, and venomous. I will document my position from the Bible then will provide overwhelming proof that all church leaders down through the centuries have stood exactly where I stand. I will preach of God’s purpose, parameters, and prerequisites for marriage. And she and her girlfriend haven’t met His qualifications.

I will preach that if she and her girlfriend show no remorse, no regret, no repentance there will be eternal judgment for them! I will preach from Jer. 6:15: “Were they ashamed when they had committed abomination? nay, they were not at all ashamed, neither could they blush: therefore they shall fall among them that fall: at the time that I visit them they shall be cast down, saith the LORD.” That passage teaches that same sex “marriages” are squalid, shameful, sorry, sordid, and sinful.

Furthermore, our church restrooms will not be transgendered. Men and boys will use the same restroom for males and girls and women will use another restroom for females. Each gender will be required to have the appropriate “equipment.” If anyone tries to enter a restroom without the correct obvious physical characteristics, they will be removed by a couple of my burley deacons without ceremony onto the parking lot. That goes for the mayor and her girlfriend. It also goes for any of her bodyguards! Deacons grow big in Houston.

Our lawyers are not needed. We are not interested in pleadings, polls and petitions but we will protest. I have invited all pastors in Houston to meet with me outside the mayor’s office this Friday at noon. We will not sing, pray, or preach but we will stand there as silent witnesses to the fact that no one on earth, no court, no official will tell us what to preach or to change our stand on morality. And for sure, we will not remodel our restrooms to satisfy a bunch of shameless, selfish, and sinful cross- dressers who are violating the Scripture in Deut. 22:5: “The woman shall not wear that which pertaineth unto a man, neither shall a man put on a woman’s garment: for all that do so are abomination unto the LORD thy God.”

No doubt some weak, wimpy, whiney, wobbly, wishy-washy preachers will also attend our protest, in opposition to us, suggesting that they represent biblical teaching. So be it. This is still America where weird, wacky, and wrong “men of the cloth” can display to the world their capitulation to the corrupt culture.

Moreover, it is interesting that no one in Houston or in any other American city is demanding to hear what Muslim imams are preaching! Isn’t that interesting? But we know that they are teaching jihad, that’s “fighting for the cause of Allah” and even recruiting fighters to fight in the Middle East! Right here in America! But her honor is not concerned about Muslims. Methodists and Baptists for sure, but not Muslims.

The mayor is a “predator protector” and that is not part of a mayor’s job description. She would be wiser and more productive to fill the pot holes instead of trying to intimidate preachers.

I sure do wish I lived and pastored in Houston!

(In a recent development, after much public outcry, including over 1000 bibles being sent to Mayor Parker, she has rescinded her subpoena for the sermons, stating it was not her intent to infringe upon religious freedoms.)