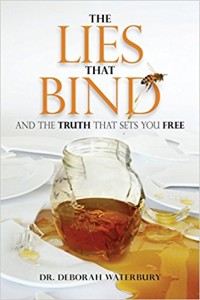 CINCINNATI, OH (ANS) – As founder of Love Everlasting Ministries, Dr. Deborah Waterbury has spent the last decade ministering to women around the world, including starting a trade school for women who have been left widowed by AIDS in Malawi. But after writing nine books, including bible studies and fictional novels, Dr. Waterbury shares the most intimate details of her pubic fall from grace in the new memoir, The Lies that Bind.

Though she has shared parts of her story at conferences and churches over the years, she had never, as she describes it, “connected all the dots” between her childhood trauma and her subsequent life of promiscuous sex and alcohol abuse.

“When my world came crashing down around my feet because of my own life of sin,” says Dr. Waterbury, “Jesus met me right in the middle of that sin and heartache, and His only words to me were words of love and forgiveness. When I began to write out my testimony in its entirety starting with the rape when I was twelve and saw the lies I began to believe about who I was as opposed to who I know I actually am, exposing those lies became the only thing I could think to do. This endeavor became a book about deliverance. It is about breaking the chain that bind us, discovering who we are, and living beautifully in the truth. But there is a lot of heartache in the pages. I had to stop writing many times because I was sobbing so hard.

Dr. Waterbury shares the candid details of the double life she led throughout most of her adulthood. While serving in churches, being married to an Air Force pilot, and the mother to two boys, Waterbury secretly had sexual relations with numerous men until it finally came crashing down fifteen years ago. She was a worship leader at a mega-church, having an affair with another public figure in the church who was also married with children. When the relationship was discovered, Waterbury says all her lies were exposed in the most public way possible. While it was devastating to her family and friends, it became her moment to finally get real with herself and God. And though her husband, Jeff, decided to stay with her, she readily admits their marriage did not heal overnight.

“If ever a marriage deserved to end, it was ours. In human terms, Jeff and I have no right to still be married, but God is bigger than that. He works miracles, real miracles, every day. I spent too much time trying to make my poor Jeff be what only Jesus could be. Once I stopped that and realized I already had Jesus, it freed Jeff up to be what he could be for me. We didn’t forgive each other immediately. It took years to recover from the pain we had caused each other, and a commitment by both of us to trust God in the reconciliation process.

In “The Lies That Bind,” Waterbury identifies five distinct lies that she believes are the most common stumbling blocks for people. Both she and her husband now counsel individuals and couples dealing with various types of difficulties, but Waterbury says that total transparency is the only way to ultimately begin the process of healing.

“When I counsel someone who is caught in a terrible web of lies, my advice is always to expose the lies. Exposing lies is a difficult thing. There will be backlash. There will be people who aren’t gracious and there will be repercussions to the sins we commit. God never said that when we sin we wouldn’t have to live in the realities that come about in this life because of those sins. However, if a person wants freedom from the bondage of lies and deceit, then the only path to that is honesty and truth.

Jesus never promised us a rose garden in this lifetime. It’s certainly not going to come up roses when we pour acid on the flowers, for heaven’s sake. God is in the business of restoring all that the locusts have eaten and making glorious beauty for ashes. The greatest ministries and the most glorious of lives have been built on the charred remains of people that some would think had nothing left to offer.”

The book, The Lies That Bind is available at Christian bookstores. For further information on the ministry of Dr. Waterbury see the website: love-everlasting-ministries.com.