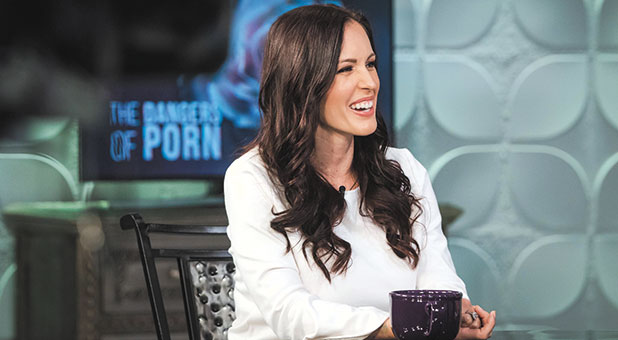 Brittni De La Mora remembers the day the Holy Spirit rescued her out of the sex industry. The pornographic-film star—one of the most prominent in her field—was about to travel to her next big project. But before she boarded the plane, the Holy Spirit told her, “Bring your Bible.”

De La Mora obeyed the Spirit’s prompting. While reading her Bible during the flight, she came across Jesus’ words to the church in Thyatira.

“I get to Revelation 2:20-24,” De La Mora says. “It says—and I’m paraphrasing—’I have this sin against you: You tolerate that woman named Jezebel. She leads My people into sexual immorality. I’ve given her time to repent, and if she doesn’t repent, I will cast her and her children into a sickbed.'”

De La Mora says the moment she read that Scripture, the Spirit of God not only convicted her of sin but also gave her a promise: “Brittni, I have a better life in store for you, and if you just give Me a step of faith today, if you would just quit the industry, I promise you I’m going to turn things around for you. I’m going to give you a great life.”

De La Mora quit the sex industry that day. She flushed her drugs down the toilet and, for the first time in seven years, didn’t get sick without them.

De La Mora also preaches the gospel with her husband, Richard, at Cornerstone Church in San Diego. The couple met there six years ago and have been married for almost three years. Their new book on marriage, Fresh Fire, offers a 14-day challenge with principles from the Bible to keep marriages strong.

“I just got to see so many incredible things because I took that step of faith, and I gave a little bit of obedience to God that day,” De La Mora says. “And Deuteronomy teaches us that there are blessings behind our obedience.”

From Hungry to Healed

But De La Mora’s heartwarming transformation story doesn’t come without pain. She says she first entered the sex industry because of her incessant hunger for a sense of love and belonging.

“When I was little, I faced a lot of rejection and heartbreak, and that started at home,” she says. She recalls the toxic messages she heard at home: “You’re a loser,” “You’re never going to amount to anything in life,” “I hate you.”

“So I remember getting invited to a night out in Mexico, and that night, I got drunk. I was probably 16 years old, and I ended up in a strip club. And that night when I was at the strip club, I was getting something I wasn’t getting at home.” There, people told the vulnerable teen, “You’re beautiful! We love you!”

So in college a couple years later, when producers approached her with an offer to star in “romance movies,” De La Mora couldn’t resist. “You’re destined to be a star!” De La Mora says they told her. “If you’re ever interested, we’ll be in Los Angeles. Give us a call.”

One day and one phone call later, De La Mora found herself in a chair getting her hair and makeup done for an interview with one of the top adult-film agencies. To her excitement, the agency took her on as a client and gave her the stage name Jenna Presley.

“I was around 105 pounds,” she says. “I was not fat, but that really triggered an insecurity in me, and so that started a drug addiction, because I started to do cocaine to lose weight.”

Throughout her seven years in the industry, De La Mora struggled with anorexia, drug addiction and even suicidal tendencies. Three years in, she tried to leave the industry and escape her new heroin addiction. She started visiting church with her grandfather, received her first Bible and even began hearing the Holy Spirit speak to her.

“I’ve been walking with the Lord six years now, and every single day, I worship, I pray and then I read the Bible,” she says. “During my healing process, this was crucial, because even in the Bible, we learn that it’s in the presence of Jesus that people are made whole again. It’s in His presence that people get healed.”

The Holy Spirit also acted as her primary counselor, often leading her to stand in front of the mirror and speak words of life over seasons of brokenness during her childhood. “It brought so much healing to me,” she says. “The Bible teaches us that Jesus says the Holy Spirit will be your Counselor, and that’s exactly what He was for me. I didn’t go through any type of counseling or therapy with anyone other than the Holy Spirit.”

De La Mora says this is the reason many who leave the industry end up going back. That’s why she founded Always Loved in 2017. The ministry offers sex workers the encouragement and support they need to leave the industry if and when they’re ready. That support includes mentorship, financial support and even help creating resumes.

“The Holy Spirit is huge in this ministry,” Richard De La Mora says. “On one specific occasion, I saw my wife in tears over a woman who left the industry and then decided to go back. The Holy

Spirit counseled her and showed her how to handle the situation with grace. … Unexpectedly, the woman quit for good six months later. It’s important to allow God’s ministry to be His ministry and the only way to do that is to let Him lead.”

Because of the Holy Spirit’s guidance, De La Mora has already seen success with Always Loved. She tells Charisma that one woman who quit the industry six months ago is still walking in freedom and even got her old job back as a preschool teacher. “She is just so on fire for God,” De La Mora says. “God has restored every ounce of her. … She’s going to church, and she’s serving in ministry at her church and doing incredible things for Jesus.”

“We can vouch really heavily for her transformation, her character, her marriage,” Gross says. “And it’s great telling a [success] story of the work that we’ve done. But you don’t get many Brittni stories. They come few and far between.”

De La Mora agrees and says true healing comes with time. She points out that people who experience radical transformations that stand the test of time all have one thing in common: a close relationship with Jesus. “Although it’s a blessing to be at church on Sundays, take it one step further and bring God into your home Monday through Sunday,” she says. “Allow God to not just be in your life, but let Him become your life.