How Important is Religious Freedom 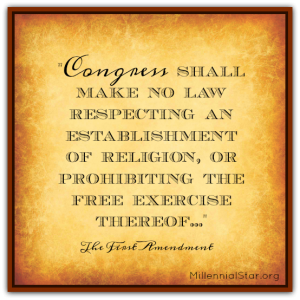 Most people don’t realize just how important it is to preserve our religious freedom. They also don’t realize just how close we are to losing it and what those consequences will be. One of the major reasons for the steady erosion of this freedom in recent years is a false understanding of the ‘Separation of Church and State’ that has been circulating for many years. Churches and people of Faith have operated in fear due to the IRS threat of losing their ‘tax-exempt’ status and possible lawsuits.

The ‘Fake News’ phenomenon is not just for politics. There has been a lot of it directed at religion and the faith community as well. The truth is that religion has always been an integral part of life in America and our founding fathers often expressed just how important it was. Where would America be without founding fathers like John Adams who said…

“It is religion and morality alone which can establish the principles upon which freedom can securely stand. The only foundation of a free constitution is pure virtue.”

I wonder if American Freedom would even exist today if the leaders of the American Revolution were atheist or humanist. Look at who they attributed their freedom to in ‘The Declaration of Independence…

“We hold these truths to be self-evident, that all men are created equal, that they are endowed by their Creator with certain unalienable Rights, that among these are Life, Liberty and the pursuit of Happiness. —

One of the first rights to be protected in early America was the right of conscience – the right to believe differently on issues of religious faith. Look at the 5 rights in the First Amendment: #1 – Religion #2 – Press #3 – Speech #4 – Assembly #5 – Petition

What is the Purpose of The Bill of Rights? The bill of rights serves to protect citizens from excess government power like colonists experienced from England at the time. Government should not be telling us what to think and what to say, yet that is exactly what is happening more and more.

A recent article in the Washington Examiner raises a red flag for those who value religious freedom.

“In the last two months before the election, 50 House Democrats became new cosponsors on a bill gutting the 25-year-old Religious Freedom Restoration Act (signed into law by President Clinton with solid bi-partisan support). That brought the total to 172 House Democrats, a solid majority of their party, who now support H.R. 3222. They are ready to undo RFRA as a prominent part of the agenda as their party takes control of the House. This bill would declare that religious freedoms must yield when they run counter to the LGBTQ agenda or to other progressive causes such as abortion rights. Pushing this are progressive groups which claim that religious beliefs are just a cover for discrimination, bigotry, and hate.”