How Strong Families Help the Economy 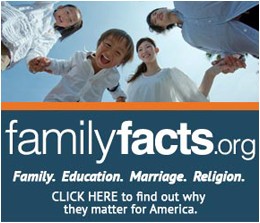 (WNS)–The government will never provide for you as well as a stable two-parent family will. That’s the summary of the Heritage Foundation’s first annual report on America’s societal and economic trends, released July 23. The 2014 Index of Culture and Opportunity states that while abortion and violent crime are on the decline, the marriage rate is also dropping, giving rise to single-parent homes and accompanying economic troubles.

“We need to be talking about what it is that’s going to get at the roots of … poverty in America,” said Jennifer Marshall, the co-editor of the report.

Marshall, who is also vice president of the Heritage Foundation Institute for Family, Community, and Opportunity, wanted to create a manageable report compiling the latest statistics on the economy and the state of families in America. Unlike other reports studying the two factors separately, this one suggests connections between broken families and a broken economy.

The report provides some good news. Abortion has fallen to its lowest level since the Supreme Court passed Roe v. Wade. Women had 16.9 abortions per 1,000 in 2011, compared to a peak of 29.3 in 1981. While the statistics aren’t conclusive because several states don’t report abortion figures, the trend shows more women choosing life.

“That’s the result of some focused attention in policy circles and in communities,” Marshall said.

While the 2008 recession caused some of that decrease, Marshall believes single parenthood contributes to it: “Unwed childbearing is enormously important.”

Children of unwed mothers are four times more likely to live under the poverty line than children of married couples, and they are more likely to go into crime or become single parents themselves.

Meanwhile, the poor are relying more on government housing and food stamps. While the government has spent billions more dollars on welfare, the number of people who live below the poverty line and are not self-sufficient has remained a steady 15 percent since the 1980s. All of these factors lead to a multi-generational dependence on a welfare state, said Heritage fellow W. Bradford Wilcox. “If you are worried about growing inequality in America, you should care about marriage,” he said.

While the index doesn’t include much new information—statistics come from governmental and civil institutions—it does compile the information and add analysis from Heritage fellows. Heritage plans to update this report every year so it can track changes.

Marshall said she hopes the report will equip lawmakers to form policies and encourage citizens to support families: “It is critically important that we continue to uphold the ideal of marriage.”