A bombshell new report reveals a mysterious twist in a criminal case involving a top Democratic lawmaker’s former IT worker. The Capitol Police reportedly found a computer that may belong to Debbie Wasserman Schultz, the divisive former leader of the Democratic National Committee and current congresswoman from Florida.

And the explosive police report cited by The Daily Caller suggests it may have been planted there for police to find by the IT worker, who is ensnared in a criminal investigation.

The Daily Caller said police not only found the laptop computer with the username “RepDWS” – potentially making it the congresswoman’s computer – but also a Pakistani ID card, copies of a driver’s license and a congressional ID badge all belonging to Imran Awan, her former employee.

Citing a police report, the website said investigators also found letters to the U.S. attorney, and a notebook marked “attorney-client privilege.” Making it even more unusual, it was all found tucked away in an old phone booth in the Rayburn building. While that’s a building full of offices for lawmakers, it’s NOT the building Wasserman Schultz works out of.

The question has to be asked: Was it placed there… specifically so that it could be found by police? 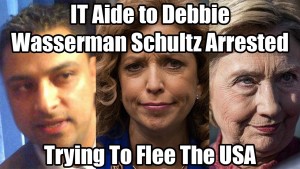 “Imran Awan is a calculating person who made great efforts to cover his tracks, both electronically and physically,” Texas Rep. Louis Gohmert told The Daily Caller. “Placing that laptop with his personal documents, which may well incriminate him, those he worked for, or both, in the dead of night in a House office building, was a deliberate act by a cunning suspect, and it needs to be investigated.”

Also curious is Wasserman Schultz’s statements after the discovery of the laptop. She was seen in a videotaped hearing throwing a fit over a device the police were holding onto that she apparently wanted back. The Daily Caller now believes it was quite likely this laptop.

In footage of the hearing, Wasserman Schultz angrily demanded that it be returned, and constantly interrupted the police official charged with explaining why they had to hold onto it due to its link to a criminal case.

She even threatened the police. “I think you’re violating the rules and conduct your business that way,” she sneered in the May hearing. “And you’ll expect that there will be consequences.” Later, however, she claimed the laptop wasn’t hers.

Awan worked not only for Wasserman Schultz but also several other House staffers. Earlier this year, he and four others – most of whom are relatives, including his wife – were accused of trying to steal House equipment and violating House security policies.

He has also been indicted on four counts including false statements, conspiracy and bank fraud, The Washington Times reported earlier this summer. His wife had fled the country, but cut a deal with prosecutors to return and face charges.

If Wasserman Schultz is dreading what’s on that laptop, it may be because she has a history of embarrassing digital discoveries. She resigned in shame as chair of the Democratic National Committee last year when leaked emails exposed her and other party officials conspiring to undermine Bernie Sanders and hand the nomination to Hillary Clinton.

Her five-year tenure was marked by Democrats losing at nearly every level, dropping seats in Congress and in local governments around the nation. When word got out the President Barack Obama was looking to have her axed from the role in 2013, “she began to line up supporters to suggest the move was both anti-woman and anti-Semitic,” according to Politico.

Clearly, she hasn’t made many friends. And that could be coming back to haunt her now.