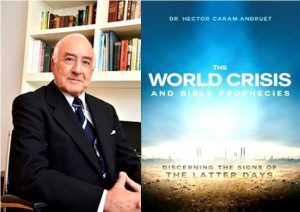 The World Crisis and Bible Prophecies

(ORLANDO, Fla.) “The world is going through a crisis like it has never experienced before,” says Dr. Hector Caram-Andruet. He has served as a senior executive with Citibank, PepsiCo, and General Foods. His analysis of present economic conditions is troubling. He points to the astonishing levels of public and private debt and says we are stimulating consumption beyond a sustainable level of personal income.

Like a house of cards, the world markets will not remain viable for long. “The easy way out over the long term is to print money which inevitably leads to inflation says Caram-Andruet. He says that more people are becoming disillusioned by ineffective leadership. “It is clear that nations are dealing with the effects of and not the causes of the political, socio-economic, and financial crises while governments incur growing budget deficits and alarmingly increasing national debts.”

In The World Crisis and Bible Prophecies (Creation House), Caram-Andruet points to real world issues to explain how biblical events and warnings are unfolding today. “Greediness and pride are great inducements used by the forces of evil to bring the world to its present condition,” he explains. These, he believes, will bring about a new world order under a centralized power. “The world has already entered a time of deception and confusion,” he adds.

Caram-Andruet says he doesn’t want to sound like a prophet of doom but adds there is no question except that we are living in increasingly troubled times. He also points out that the U.S. has dropped from number two to eighteen ranking in economic freedom. This is a precursor to losing other vital freedoms but it also spells a weakening economy. “Economic productivity declines the more that government restrictions put pressure on a nation’s freedom to act,” he says. “The result is lower per capita income, employment, and quality of life.”

In his book Caram-Andruet he identifies the leading spiritual and economic indicators pointing to massive changes. These include everything from food and water shortages, climate changes, regional wars, and the substitution of physical currencies for electronic currency.  But ultimately he believes the problems that plague the world today are spiritual in nature — which is why he wrote a book designed to generate a greater awareness of the connection between world events and end-time warnings.