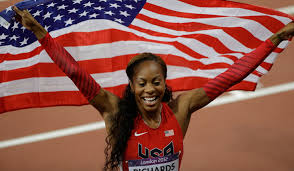 “I made a decision that broke me, and one from which I would not immediately heal. Abortion would now forever be a part of my life. A scarlet letter I never thought I’d wear … As a Christian and a woman who never saw herself have an abortion, it was really tough for me to experience. I get emotional talking about it right now. [But] He does forgive us and it’s important we forgive ourselves.” -Sanya Richards-Ross

(Austin, TX)—Jamaican-American Sanya Richards-Ross, 32, a 2012 double-gold medalist, is shaking up the politically-correct news world with her recent confession that she had an abortion in 2008, the day before leaving for the Olympic summer games in Beijing. (Photo: Sanya Richards-Ross/via Fox News)

Even more upsetting for pro-abortionists, Richards-Ross—who is currently expecting her first child—has also gone public about regretting her decision, finding healing and forgiveness in Christ, and is now adamant about seeing the abortion-culture changed.

“I literally don’t know another female track-and-field athlete who hasn’t had an abortion and that’s sad,” she said in a recent interview for Sports Illustrated Now to promote her new book, Chasing Grace: What the Quarter Mile Has Taught Me About God and Life. “So, for me, I’m hoping that this will open up some discussions—to helping especially a lot of young women who were in my situation not experience what I did.”

Richards-Ross goes on to explain the challenges female athletes face, such as the fact that birth-control pills can cause weight-gain and “misinformation” they receive from their peers. In hindsight, though, she intimates that athletic challenges like weight-gain and motherhood are far preferable to the deep emotional scarring abortion brings.

For example, when Richards-Ross competed again in the 2008 Olympics she said she wasn’t as successful as she wanted to be.

In a Fox News interview, she explained: “A big part of why I wasn’t successful was because I just felt so unworthy and the shame that I was carrying was very heavy. When I reflect on that time, even though it’s still painful to talk about it, I do appreciate that God was with me in that valley.”

It was in that moment Ross told her interviewer that she realized there was nothing she could do to “separate yourself from the love of God.”

“No matter what poor choices you make,” she concluded, “He does forgive us and it’s important we forgive ourselves.”

Pretty brave words, I’d say, coming from a woman who knows the mainstream press could eat her alive for being so honest. But Richards-Ross says her courage is down to prayer.

“I was very prayerful about sharing my journey,” she also told Fox News. “When life gets a little bit gray, even when you want it to be black-and-white, it’s not always easy. So my hope is to be honest and hope it helps other people.”