I Was Beaten Up by Antifa 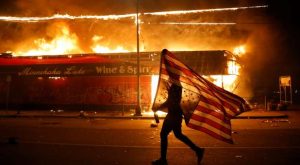 A protester carries a U.S. flag upside down, a sign of distress, next to a burning building Thursday, May 28, 2020, in Minneapolis. (AP Photo/Julio Cortez)

This eyewitness account of the violence in front of the White House is by Ken Joseph Jr., a longtime missionary to Japan, author and political activist whom I’ve known for 20 years. In this article, he shares his personal opinion on the significance of current events in our world. I interviewed him about this for my Strang Report podcast, in which he gives more details about how this is a spiritual attack but will lead to a great awakening. Stephen Strang – Charisma

I was walking down the street in Washington, DC. I noticed the despised, ISIS-like, black-and-white flag of antifa, but they were just loud and obnoxious as usual.

As the day wore on, though and I came out of an office, things had started to change. I was walking near the White House in Lafayette Park, which is always a bit noisy with various groups around, but this time it was different.

Antifa was different. Everyone was dressed in black. They were extremely organized and moved using apps in organized formation. It became frightening watching them all looking at their iPhones, walking in military precision together, straight ahead, left, right. They were carefully organized, all wearing the same black clothing so you could not figure out who they were.

Then the signs came out. I couldn’t believe my eyes because, as they began to march in the middle of the street, right off the White House, the signs said, “Kill Them”. It was one thing to demonstrate, another to demonstrate with a little organization, but this was a well-organized and funded army, now urging killing.

Suddenly they turned and, with military precision, all began walking, and I was in the middle of them. I quickly moved to the left of the street to get out of their way, but the massive army began to move faster and faster. Suddenly, I was in the middle with no way to get out. Like a steamroller on hot asphalt, they just mowed me over.

As I turned, three white girls, with the nastiest expressions in their eyes, punched me and shoved me to the ground and moved on, with person after person just stepping over me.

I was so shocked that it took a second to understand what had just happened, but I was able to get to the side of the street and stand up, just in time to see them all curse me as they marched back in North Korean military precision.

It uses the exact same tactics and methods that Communists are using in Hong Kong, North Korea, China and all the other totalitarian states. They can’t win the discussion, so they just use violence. What is happening across the country is not accidental. It has nothing to do with the killing of George Floyd. It is very simple to understand what happened.

First, I believe “the plan” had long since been set up, organized and was on constant standby for the excuse. Second, I think the Democratic governors, mayors and other officials were all in on it. When the much-awaited excuse happened in the form of the killing of George Floyd, the message went out: “execute plan.” Whipped up by the media, who I believe was also part of the plan, regular people began to gather, and then antifa merged into the demonstrations and engaged in their extremely well-organized and planned operations, throwing bricks, breaking glass and more. Well-paid and constantly on alert, with the most advanced communication devices, they sprang into action.

The purpose? Again, just like the Mueller Report, Russia, impeachment, the Chinese Wuhan virus, this is just one more tool brought out of the toolkit of the “deep state”: the worldwide, unelected establishment class that is in complete meltdown that their power and rule is collapsing

Where are the worldwide demonstrations against Communist China for purposely spreading the Chinese Wuhan virus to the world? One man is killed, and the world demonstrates against the United States, but 6 million are infected and 300,000 die, and there is total silence.

Thankfully, the president just declared antifa a terrorist organization. Antifa and the deep state are in panic, but the tide has turned, and people are seeing firsthand how evil evil is and the total silence when Communists do it.

The Fifth Great Awakening has begun and is transforming the world for good.