ICE vehemently denied those allegations in a series of tweets, saying that reports of ICE checkpoints and sweeps or “roundups” are not only false, but dangerous. “These reports create mass panic and put communities and law enforcement personnel in unnecessary danger,” ICE tweeted. 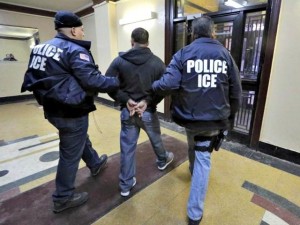 To prove its point, ICE tweeted a “throwback” to April 2012, when immigration officials arrested more than 3,100 convicted criminal aliens over the course of a six-day operation. Operation “Cross Check,” which took place towards the end of President Obama’s first term, was the largest single effort in ICE’s history. Yet it barely drew a peep from the mainstream media.

Immigration advocates expressed some concerns at the time, mostly in regards to Obama’s stance with Hispanic voters, but stated they supported the targeting of criminal illegal aliens for deportation. Advocates are painting a much darker picture in the aftermath of Trump’s first immigration raid, which netted less than one-third the number of arrests than Obama’s in 2012.

Gabe Gonzalez, a community organizer in Chicago, accused Trump of “creating an atmosphere of terror” for both legal and illegal immigrants. Gonzalez recognized that Obama and Trump’s policies on immigration share many similarities, but said it’s Trump’s “rhetoric that scares the hell out of people.”

But according to ICE, it’s the news media that’s to blame for cultivating fear and uncertainty among America’s immigration communities, not the president’s immigration policies. “Any groups falsely reporting such activities are doing a disservice to those they claim to support,” ICE tweeted in response to the media’s dishonest reporting.